Champions Tyrone cruised into another Ulster SFC final with a resounding 1-21 to 1-12 win over Donegal at Clones.

The Rampant Red Hands swept to a 0-12 to 0-5 interval lead, before Tiernan McCann’s goal pushed them further ahead, and they never relented.

Micheal Carroll pulled back a late Donegal goal, but they never got close to the red-hot Red Hands.

In front of a crowd of 22,609, Donegal pressed high from the start, going ahead with a Paddy McBrearty free, before a Murphy ’45 doubled the advantage.

But Tyrone raided on the counter-attack for David Mulgrew and Mattie Donnelly to bring them level.

It was fast and furious in those opening stages, with Rory Gallagher’s men restoring the two points advantage with brilliantly taken points from McBrearty and Murphy. 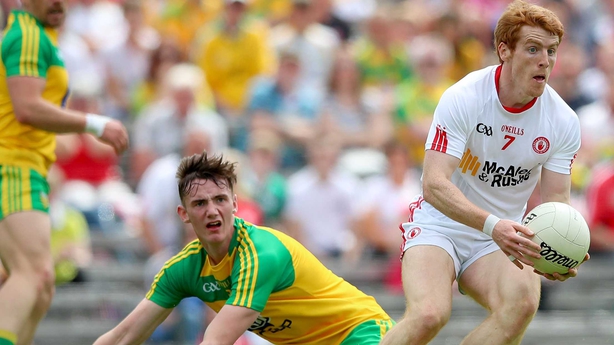 They pushed up on Niall Morgan’s kick-outs, but the Tyrone goalkeeper bombed one 60 metres over the top for Colm Cavanagh to get in behind and send brother Sean in to fire in a shot which Mark Anthony McGinley saved brilliantly.

Donegal had their own goal chance when Murphy send Eoin McHugh away. His pace brought him clear of two covering defenders, but one-on-one with Morgan, he pulled his shot wide.

Both sides dropped 14 players deep into their own half when not in possession, but raided with speed and purpose to add sparkle to a fascinating tactical battle.

The vital touch in the tackle was the key in turning defence to attack, particularly for Tyrone, who went ahead for the first time through Tiernan McCann on 21 minutes.

The second quarter was played entirely on Red Hand terms as they turned over possession and pushed forward in numbers, without leaving themselves open at the back. 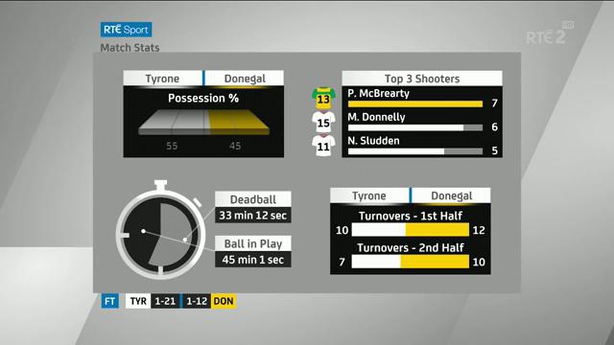 And their score-taking was of the highest order as the shot seven points on the spin to open up a seven points lead.

Five of their first half points came from defenders, with Padraig Hampsey and Peter Harte hitting two each, with Kieran McGeary and Niall Sludden also finding the target on the way to a 0-12 to 0-5 interval lead.

And they struck a major blow less than three minutes into the second period when Tiernan McCann darted through a gap in the Donegal defence to fire home a goal.

Mark Bradley had just opened up a ten points lead when he was black-carded, but the Tyrone men maintained their focus, with Colm Cavanagh excelling in his demanding dual role as midfledier/sweeper.

Mattie Donnelly and McGeary added further scores, before Micheal Carroll pulled back a Donegal goal, latching on to the loose ball after Michael Langan’s shot had been blocked. 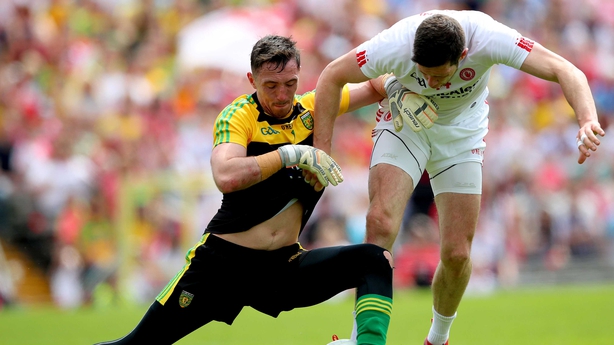 But the Red Hands didn’t waver, and Ronan O’Neill became the tenth player to score for the Anglo-Celt Cup holders, before Sludden slotted his fourth.

Niall Morgan and Declan McClure piled on the misery for Tir Chonaill, as a dozen players in total got in on the scoring act for the provincial champions, who won pulling up.