By Declan Rooney at Pearse Park

Galway held off a strong comeback from 14-man Mayo to force their way into the Connacht final after a 0-15 to 1-11 win at Pearse Stadium.

The sending off of Keith Higgins in the 26th minute had a huge impact on the game as Galway worked their way into a four-point lead only for Cillain O’Connor to kick three late frees to pull Mayo back into contention.

But Galway held on to claim a one-point win and clinch their spot in the second final in a row against either Roscommon or Leitrim.

With a huge gale at their backs in the first-half, Galway didn’t waste any time in building an advantage and after 12 seconds Damien Comer pointed after Paul Conroy won the throw-in, and straight from the restart Galway pressed up which led to a sweet point from Gareth Bradshaw off the outside of his boot for a 0-02 to 0-00 lead inside a minute.

A foul on Bradshaw on the right saw Sean Armstrong stroke over Galway’s third point from outside the 45 metre line in the third minute, but Mayo soon settled and built their way into the game.

Facing Galway’s tight defensive line they needed to be patient and pick their way through, but five minutes in Andy Moran spotted the gap and allowed Kevin McLoughlin to score. 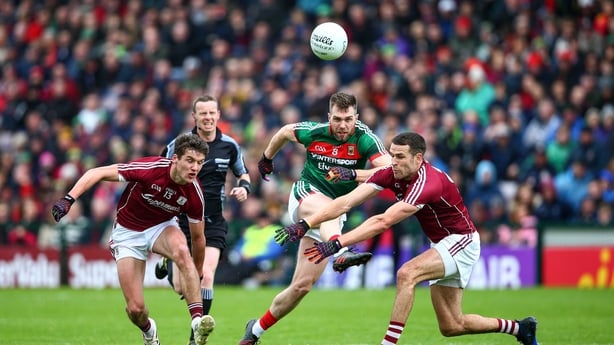 A minute later the key score of the first-half arrived for Mayo. Lee Keegan looked to have guided a long range point over the bar but his effort hit the post, fell to McLoughlin and the Knockmore man finished low to the net for a 1-1 to 0-3 lead.

There was plenty of frantic play from both sides in the opening quarter, but one of the calmer moments came from Michael Daly who settled his side with a beautiful score from 45 metres, which sailed over on the wind.

Cillian O’Connor saw a shot on target crash back off the crossbar soon after and Shane Walsh landed a great score on the run for Galway, but Mayo seemed able to keep in touch as O’Connor’s frees and another point from Fergal Boland kept them close to their rivals.

Nine minutes from the break Galway’s hopes of a second win in a row over their rivals was boosted when Keith Higgins was shown a straight red card following an off the ball incident with Comer, but as temperatures began to boil, Tom Flynn soon joined him on the sideline when he picked up a black card.

But right through the first-half Armstrong was reliable for Galway and his four points from placed balls before the break meant they were well worth a 0-09 to 1-05 half-time advantage. 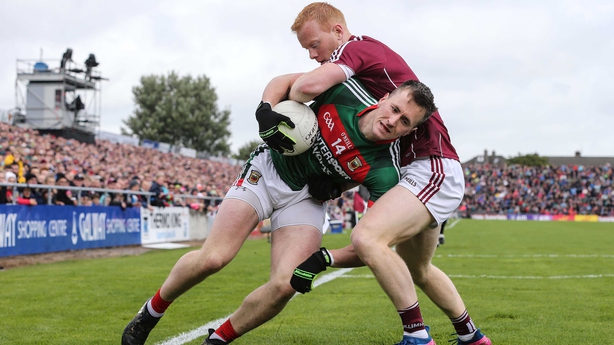 A bright start from Galway launched the first-half and they had a similar introduction to the second when an Armstrong free and a great score from substitute Eamonn Brannigan in the space of a minute stretched their lead to three points.

There was no doubt that the extra man around the middle was helping Galway, but a long range score from Diarmuid O’Connor trimmed the fat on that advantage in the 43rd minute, but Armstrong’s 45 into the wind and Comer’s point when the kick-out was pressurised soon had four between the sides.

Three Cillian O’Connor frees pulled Mayo to within a point with two minutes remaining and with six minutes added time to be played the sizeable travelling support fancied their chances of a replay, but after Johnny Heaney twice cleared off the line five minutes from time, Evan Regan’s late effort was the closest they came as Galway held on. 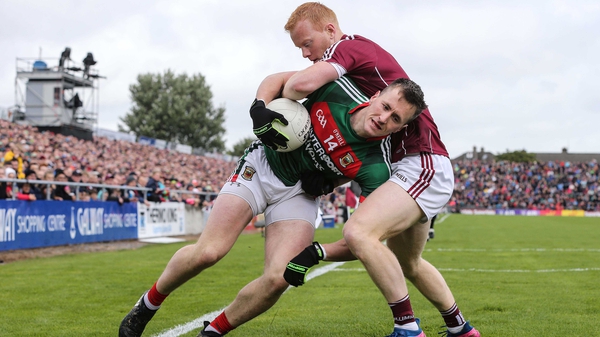