Down ended a 25 year wait for a championship win over neighbours Armagh with a 0-15 to 2-7 Ulster SFC quarter-final success at Pairc Esler.

The Orchard men stunned the home side with two first half goals, but failed to present an attacking threat in a disappointing second period.

Darragh O’Hanlon’s four points haul helped get the Mourne men over the line and into a last four meeting with either Cavan or Monaghan.

A disappointing second half failed to spark, with three of Armagh’s three scores coming in stoppage time.

In front of a crowd of 16,168, Down raced into an early four point lead, with Caolan Mooney punishing a Charlie Vernon error with a fisted opener, before Ryan Johnston hit the target.

Goalkeeper Michael Cunningham and Jerome Johnston steered over frees, and the Orchard men were caught cold.

Armagh failed to claim their opening score until the 13th minute, but that was a stunner, with Mark Shields smashing his shot to the roof of the net after the Mourne defence had failed to clear a dropping free kick from Oisin O’Neill.

The Orchard County could have had a second goal, but Aaron McKay blazed his shot over the bar, and suddenly the home side was defending desperately.

Connaire Harrison’s point provided just brief respite for Eamonn Burns’ side, for Armagh came back downfield to claim a second goal on 21 minutes.

Jamie Clarke produced a touch of magic to send Stefan Campbell in, and when his shot wsa saved by Cunningham, Andrew Murnin seized the rebound to net from close range and give his side the lead for the first time.

Down could have had a goal as play swung from end to end, but his effort was brilliantly kept out by debutant goalkeeper Blaine Hughes.

Nevertheless, they got themselves back on terms with scores from Harrison, Shay Millar and Darragh O’Hanlon. 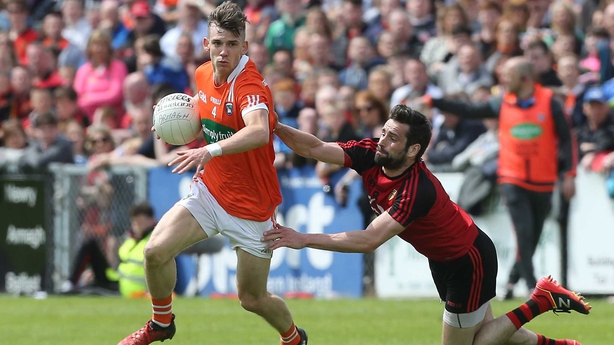 And despite operating with Kevin McKernan as a sweeper, the Down defence continued to cough up goal chances, with Murnin denied a second by Anthony Doherty, who deflected his shot onto a post.

Armagh led by 2-4 to 0-9 at the break, but once the home side got he wind in their backs, they took the game to their neighbours.

Darragh O’Hanlon fired over a couple of classy points from play and set up another for Mooney.

And when Conor Maginn punched over another, they led by three and looked hungry, fresh and confident they had plenty more to give.

Darren O’Hagan kept things tight at the back for the Mourne men, and they held Armagh scoreless for 15 minutes, until substitute Anthony Duffy found the range.

Gavin McParland’s converted free was cancelled out by Down substitute David McKibben, and deep into injury-time, a melee resulted in a rash of yellow cards.

Armagh needed a goal from a Clarke free in the in the 12th minute of stoppage time, but he blazed over the bar as his side headed for the Qualifiers.