Cork ran out four-point winners in an absorbing contest, with Conor Lehane contributing ten points for the Rebels.

It’s Cork’s first championship victory over Tipp since 2010 – and their first against their old rivals on Premier County soil since the 2006 Munster final.

Debutant Shane Kingston was another to impress for Cork, with 30,103 spectators, lancing 1-04 from play on his full championship debut.

At the end of a first half that was level 12 times, the sides were deadlocked at 0-15 apiece. 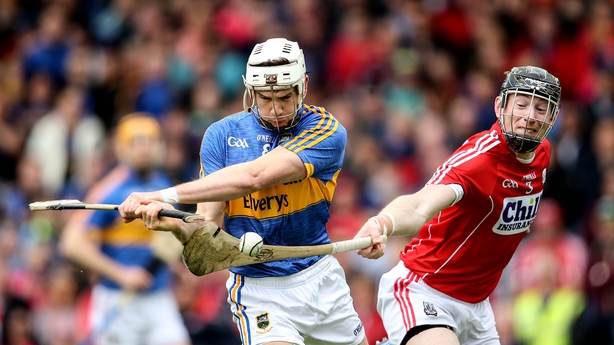 Kingston scored the 43rd minute goal to hand Cork a huge second half boost, a scruffy effort that Tipp goalkeeper Darren Gleeson won’t look back on with too much fondness.

John McGrath’s excellent goal in the 56th minute, created by Seamus Callanan’s sublime pass, had Tipp back in front, leading by 1-22 to 1-21.

But Cork hung in and a critical scoring run of 1-02 in a four-minute spell approaching the finish proved crucial.

Behind by 1-23 to 1-24, Cork levelled and then went ahead with points from Lehane, before sub Michael Cahalane ghosted in behind the Tipp cover to drive a fierce effort past Gleeson.

That goal provided Cork with the belief that their four-game championship losing streak against Tipp was coming to an end – and so it proved.

Cork march on to a Munster semi-final clash against Waterford on June 18, as Tipp face the back door in their quest to retain the All-Ireland title for the first time since 1965. 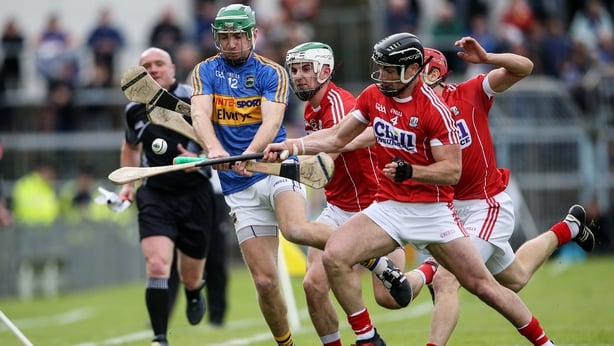 In an incredibly open game, all 12 starting forwards had registered from play in the opening half and when the dust settled, 18 players were on the scoresheet.

They were 0-03 to 0-01 clear within four minutes but the first half developed into a tit-for-tat affair.

Towards the end of the half, goal chances came and went at both ends, Seamus Callanan forcing a fine save from Cork goalkeeper Anthony Nash, before Seamus Harnedy blazed a shot into the side-netting.

A crossfield breeze blowing towards the New Stand made life difficult at times and while Cork had the benefit of it in the first half, they dug in after the break to claim a famous win.

It was a quite magnificent effort from Kieran Kingston’s Rebels, using an excellent puck-out strategy, and they’re now set up nicely for a crack at old rivals Waterford next month. 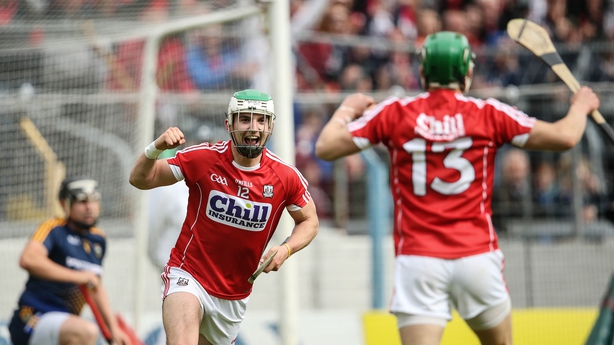 It was a costly afternoon in more ways than one for Tipperary, as corner back Cathal Barrett limped off with suspected knee ligament damage in the second half.

Scans will determine the severity of the damage to the All-Star defender, while Patrick ‘Bonner’ Maher, while named on the bench, didn’t feature either after suffering a recent hamstring problem.

When their backs were against the wall, Cork’s response was superb.

After McGrath’s goal, the Leesiders responded with two points, from Lehane and Kingston, proof positive that they weren’t going to lie down.

Beaten by nine points here a year ago, Cork have announced, in no uncertain terms, that they’re back.

In defeat, Tipp had a six-point haul from Michael Breen, named at midfield but operating at centre forward, but this was a day when their full-back line creaked and Ronan Maher endured an uncharacteristic off-day in the centre back slot.