Monaghan's class up front finally told with ten points in a row in the second half to send Fermanagh packing in tonight's preliminary round Ulster championship tie on a scoreline of 1-20 to 1-11.

Malachy O'Rourke's side were pushed hard by Fermanagh in a competitive and incident-packed first half at Clones, but ultimately they had too much firepower with 13 different players on the scoresheet.

Conor McManus hit the net after a defensive howler in the 14th minute before tussling late in the half with Ryan McCluskey in a big talking point which saw referee Derek O'Mahoney booed off at half time.

The stroll that was predicted for Monaghan turned out to be anything but early on.

In front of just 7,473, the sides were level six times in a first half that grew in intensity after an empty, insignificant opening ten minutes to this year's Ulster championship.

Kieran Hughes scored a great point but was soon dismissed for a black card for a blatant hand trip on Ryan Lyons right in front of the linesman.

That forced Monaghan into an early change but they were gifted the simplest of goals after 14 minutes to get back in front.

Erne goalkeeper Thomas Treacy diced with danger once too often with his short kickouts and Jack McCarron pounced, fed Conor McManus who dummied the 'keeper before slotting home.

Fermanagh could have folded after such a self-inflicted blow but to their credit they outscored the home side by 1-02 to 0-01 in the next ten minutes.

Paul McCusker punched a big hole in the Monaghan defence and floated a ball into the square to Ryan Lyons, who ghosted in unmarked to plant it confidently into the far corner to bring Fermanagh level in the 22nd minute.

It was lacklustre stuff save for the odd glimpse of magic. Highly-rated Farney prospect Conor McCarthy sparkled with the best point of the game, twice selling dummies on the left for a special score.

Monaghan finished the half strongly with four of the last five points, with Karl O'Connell and frees from McCarron and McManus giving them a 1-08 to 1-06 interval lead. 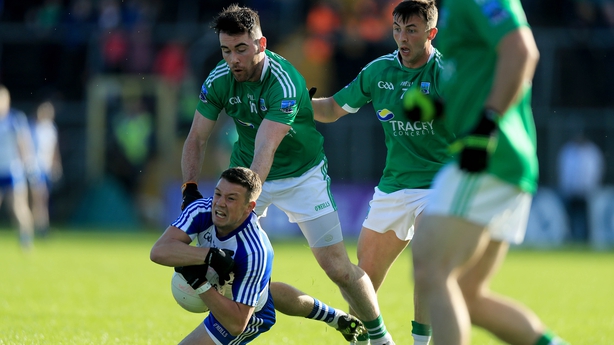 There was a controversial incident between Ryan McCluskey and McManus in the 34thminute as they stumbled and pulled each other to the ground.

McCluskey appeared to hinder McManus from getting away and the Monaghan star retaliated, with his foot appearing to make contact with McCluskey, but replays proved inconclusive.

It happened right in front of linesman Paul Faloon but referee Derek O'Mahoney took no action against either player.

In the second half, Treacy made a great save from McCarthy's goal-bound shot after Aidan Breen gave the ball away.

A minute later there was a goal-mouth scramble with a McManus shot, followed by a Vinny Corey back-heel, which Fermanagh cleared.

Yet despite scoring two of the opening three points in the second half to close to a point Fermanagh lost heart as Monaghan started to pile on the scores.

Man of the Match Owen Duffy came on and made a big impact with 0-03 at a stage when Monaghan began to take the game away completely from Pete McGrath side.

They hit 10 points in a row inside 17 minutes in a one-sided second half to ensure safe passage to the quarter-final clash with Cavan on 11 June.