Donegal still possess some old dogs for the hard road, but Rory Gallagher believes an injection of youthful exuberance has given them every chance of making their summer stretch all the way to September.

The 2012 All-Ireland champions begin their summer this Sunday with a Ballybofey Ulster SFC quarter-final clash against Antrim.

Gallagher, entering his third championship season in charge with a much-changed panel, has lost the likes of Christy Toye, Rory Kavanagh, David Walsh, Eamon McGee and Colm McFadden in the last year.

Leo McLoone and Odhran Mac Niallais also made themselves unavailable for this campaign, but Gallagher sees the transition as a positive, and believes his panel possesses a potent blend of youth and experience..

"Then you've the next generation, Paddy McGrath, Martin McElhinney, Mark McHugh on the scene since 2010/11 ,but we've a lot of new blood in this year.

"It's been a new team and a new beginning. We've approached it that way.

"The last couple of years we've had an awful lot of experienced players that had been on the go a long time but we've arrived at championship time now and we're looking forward to it."

Gallagher singled out his captain for special praise as he looked towards the weekend meeting with Antrim.

He also admitted last year's All-Ireland SFC loss to Dublin was "a setback", but one he has faith his players will learn crucial lessons from. 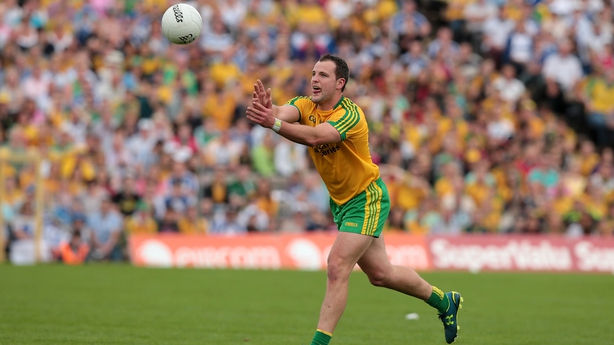 "Apart from being a fantastic player and a tremendous talent, Michael Murphy is an exceptional leader," Gallagher said.

"I would say (the Dublin defeat) was a setback. I would have very high ambitions of the boys being able to go on to an All-Ireland final and win it.

"Ultimately the boys know they didn't perform, but fair play to Dublin, they were very good on the day. We'd be disappointed. They were disappointed as a group they didn't push but that's part of the learning curve.

"Every day is different. Antrim will be very disappointed to have been relegated but as we know, in the league it's very fine margins.

"They're probably not that happy with the consistency of their displays but they still produced an awful lot of good football. We'll just prepare as best as possible and focus on ourselves."