By Ronan O'Neill at O'Connor Park

Aaron Byrne scored the decisive goal as Dublin became the last ever All-Ireland Under-21 football champions with a thrilling 2-13 to 2-07 victory over Galway at O'Connor Park in Tullamore.

Dessie Farrell’s side were 0-05 to 0-04 up at the end of the first-half and the game took off after the interval.

A Con O’Callaghan goal looked to have put them on their way, but a goal by Galway wing-back Cillian McDaid set up a grand-stand finish.

Byrne pounced late on and his goal sealed Dublin’s fifth Under-21 crown and fourth since 2010, with a late Colm Brennan green flag for the Tribesmen making no difference in the end.

Dublin held a slim single-point lead at half-time after a tense opening half where both sides had plenty of chances but failed to convert in front of goal.

Nerves played a massive part too but Dublin took an early 0-02 to 0-00 lead with points from Glenn O’Reilly and O’Callaghan, who notched a free.

O’Callaghan was Dublin’s danger man on the edge of the square but Galway full-back Sean Andy Ó Ceallaigh negated his threat for much of the opening half.

Football in Galway has been resurgent lately and on the back of their senior side claiming Allianz Football League Division 2 glory, the Tribesmen claimed the scalp of heavy favourites Kerry, scoring 1-7 from their first nine shots in the semi-final.

Dublin have dominated at senior level in recent years, having won four Sam Maguires since 2011. And this U-21 team qualified for the decider at the third time of asking, after back-to-back semi-final defeats against Tipperary and Mayo. 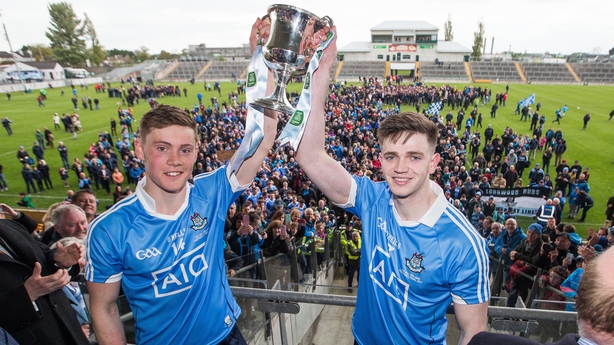 But despite O’Callaghan’s early black card they came up trumps against a fancied Donegal, and against Galway they attacked at will early on.

But Michael Daly got a crucial score for Galway in the seventh minute and that settled them. Colm Basquel hit back with two points in-a-row and Dublin held a strong 0-04 to 0-01 lead after 18 minutes.

Daly went close with a shot at goal for Galway, but that was foiled and at the other end Ronan Ó Beoláin was performing heroics in the Galway goal.

McDaid roamed forward to narrow the gap further after Eoin Finnerty scored for Galway and O’Reilly, and Galway’s Peter Cooke traded scores before the break.

Dublin were just one point ahead at half-time but they launched out of the blocks at the start of the second-half and held Galway scoreless for 14 minutes.

Dublin assumed a 1-10 to 0-05 lead with O’Callaghan’s goal five minutes after half-time putting them in command. McDaid was Galway’s star and he scored a tonic goal with ten minutes to go which was followed a Kieran Molloy point.

But Dublin scored next and it was Byrne’s goal three minutes from time that put the game beyond Galway. Brennan did find the net late on for the Tribesmen, while O’Callaghan settled for a point from the penalty spot for the Dubs with the last kick of the game.