By John Graham at Croke Park

Dublin’s four-year reign as Division 1 football champions and their 36-game unbeaten streak was ended in dramatic style by Kerry at Croke Park.

After a pulsating encounter was bossed by Kerry, Dublin could have forced extra-time at the death but Dean Rock’s 75th minute free from outside the 45-metre line struck the post as Kerry clinched their first league title since 2009.

A goal from Paul Mannion eight minutes from time saw Dublin finally click into gear after a poor second-half, but David Moran and Brian Sheehan points late on helped Kerry over the line.

For the second game in a row Diarmuid Connolly was the recipient of a black card, and unlike the one he picked up against Monaghan there was no doubt that his punishment was deserved today.

Five minutes from half-time Roscommon referee Paddy Neilan flashed the black card Connolly’s way after a brief consultation with his linesman, and after Connolly hauled down Gavin Crowley off the ball, it was full deserved. 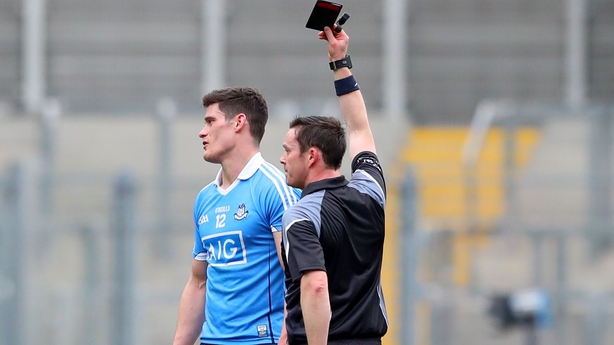 The opening 35 minutes was a rip-roaring affair with Dublin’s full-back line breaking forward at every opportunity to add extra runners to their attack, while Kerry often looked to Paul Geaney at full-forward as his side’s inspiration.

Paul Flynn curled over the opening score from the right for Dublin after three minutes, but a minute later Jack Savage – a late introduction in place of Stephen O’Brien – levelled matters when he looped onto the ball and pointed well.

Dublin were well on top in the early stages, but Jim Gavin will have been annoyed with his side wastefulness in the opening action as they dropped two attempts into Brendan Kealy’s hands, hit the post and fired a wide in the first five minutes.

That sloppy play allowed Kerry to take the lead after Savage’s positive play gave Geaney the chance, but Dublin soon settled and a score from the rampaging Philly McMahon and a Rock free put them 0-03 to 0-02 ahead.

Kerry captain Fionn Fitzgerald on the desire within the side to hang on for victory against Dublin in the league final pic.twitter.com/kmn0Um3ueD

Jack Barry was another late inclusion for Kerry at midfield, and his driving runs and those of his partner Moran punched a few big holes in the Dublin defence.

Moran hit a fine point from one such foray after he steadied himself well when he took a big hit, but at the other end, Dublin showed their ability to score from outside the defensive line when Ciaran Reddin curled over a great lead score.

McMahon and James McCarthy’s breaks out of defence were causing big problems for Kerry and they played a big role in the champions pulling 0-07 to 0-04 ahead by the 21st minute – Paul Murphy and Peter Crowley combined at the other end to pull back one score though.

A good save from Stephen Cluxton denied Moran when he was through on goal in the 22nd minute, but Donnchadh Walsh cut Dublin’s lead to two points ten minutes from the break with a good score.

Although Dublin were dominating possession, Kerry didn’t seem to have to work as hard for their scores.

After the black card incidents Kerry finished the half the stronger and kicked four of the last six points of the half, the pick of them a great Geaney point from the left after Kevin McCarthy and Walsh put in some great ground work. 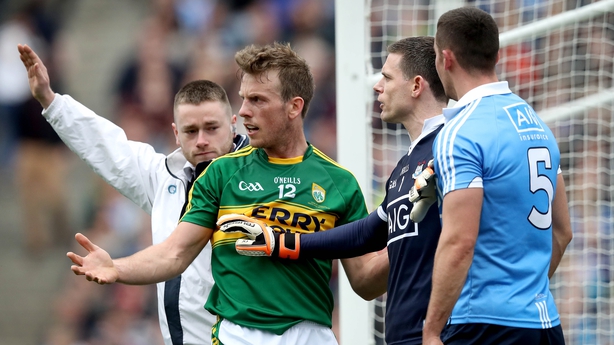 A classy Ciaran Kilkenny point meant Dublin led 0-10 to 0-09 at the interval, but that lead was wiped out three minutes after the break when Kevin McCarthy worked a yard of space to score his first point.

Geaney dropped a close range free short to miss the chance to take the lead for Kerry, but he made up for that error with two frees in the 44th and 45th minutes to give Kerry a 0-12 to 0-10 lead.

Dublin’s discipline was threatening to derail their hopes of five league titles in a row as Bernard Brogan and McMahon gave away scoreable frees in quick succession and Paul Geaney stretched Kerry’s lead to three points.

After 19 minutes of the second half substitute Mannion finally kicked Dublin’s opening score of the half and despite a couple of Rock points, Kerry maintained their lead as Paul and Michael Geaney and Walsh gave Kerry a 0-17 to 0-12 advantage.

Eight minutes from time Mannion struck again from Dublin, but this time he stepped inside the cover to score the only goal of the game.

Three minutes later Paul Geaney stretched Kerry’s lead to two points again, and fittingly the outstanding Moran kicked one of the insurance points that saw Kerry over the line.

Rock had the chance to level things from a placed ball, but his effort hit the post and Kerry hung on.