By Paul Keane at Clones

Jack McCaffrey emerged as Dublin's super sub in Clones with an injury-time goal to secure a return to the Allianz Football League final for the four-in-a-row champions.

The Clontarf man came off the bench with around 30 minutes to go and fired the decisive late goal as Dublin showed all their character to come from six points down to win and set up a decider against Kerry.

The win brings to 36 the number of games that Dublin are now unbeaten across the League and Championship though, more significantly, they are through to their fifth consecutive final next Sunday.

But they couldn't hold on as Dublin fought back to draw at 1-14 apiece in the 67th minute before McCaffrey's goal which ultimately separated the teams.

Monaghan caused Dublin real bother in previous seasons, losing by a point at Croke Park last year and by the same margin in the 2015 semi-finals.

They brought those good vibes into this contest and either led or were on level terms with the table toppers until McCaffrey's goal.

Monaghan edged a tight, tactical first-half by 0-07 to 0-06 and were good value for the slender lead in an enjoyable contest.

Dublin sprung a number of changes before the throw-in with Ciaran Kilkenny and Conor McHugh coming into the lineup.

Kilkenny lined out at midfield alongside the excellent Brian Fenton but played a deep lying role and allowed Ciaran Reddin to partner up with Fenton at stages. 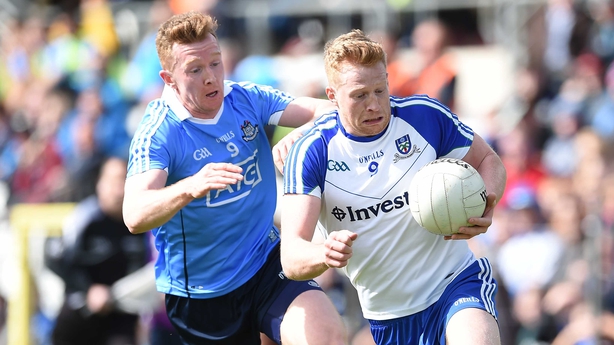 McHugh lost out on a number of 50-50 battles and was replaced by Bernard Brogan approaching half-time.

Monaghan led 0-04 to 0-01 at one stage early on with McCarron, who came into the game with 2-20 to his credit from just four previous outings, kicking two points.

Dublin's response was impressive with points from Fenton, free-taker Rock - who was fouled for the kick - and Paddy Andrews.

They were level again twice more before Monaghan moved a point clear when McCarron converted his third free-kick of the half to give the hosts a slender interval lead.

The second-half was a more open affair and hugely exciting as Monaghan first forged clear before being pegged back by the determined Dubs.

McCarron fired home the 41st minute goal from the left channel after being played in by Owen Duffy following good work by McManus.

But back to back All-Ireland champions Dublin showed all their class from then on and overcame the loss of Diarmuid Connolly to a black card, shortly after his introduction, to grind out another win.

Brogan did excellent after his arrival, while James McCarthy played the final pass for McCaffrey's goal though the 2015 Footballer of the Year failed to finish the game due to an apparent leg strain.