Waterford manager Derek McGrath admitted he may have been downplaying his relegation concerns prior to the victory over Clare that ensured his side can now look forward to an Allianz hurling league quarter-final.

Tom Devine's late goal was the crucial score as the Deise clawed back a half-time deficit to beat Clare 2-21 to 1-22 in Ennis.

"I said before the game that if we could just get something tangible out of the game towards the championship... and both sets of supporters got a brilliant game," McGrath told RTÉ Sport.

"I know ye think that's talk when you're trying to stave off a relegation battle, and when you look at the reaction of ourselves at the end of it, there was a little bit of a relief, so maybe we were disguising how much we were, deep down, worried about a relegation play-off."

Looking ahead, McGrath acknowledged both counties would have plenty of say in the destination of bigger honours later in the year, but that Waterford had gotten what they wanted from the league campaign, with a last-eight tie against Galway to come next weekend.

"I think we got a sign of what could come in the summer from both teams. There's lots of talent on board on both teams," he said.

"We're delighted to be in a quarter-final. Our aim at the start of the year was to cement our place in 1A." 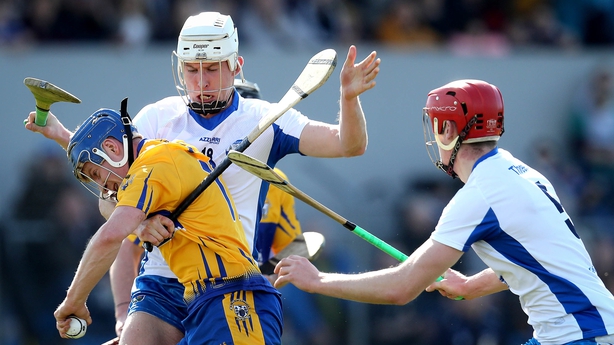 There was disappointment in the opposing dugout as joint-manager Gerry O'Connor struggled to pinpoint the reason behind the Banner men's failure to convert a late four-point lead into victory.

"We are disappointed. We were probably in a great position at half-time," O'Connor said. "We'd had a very poor start and went five or six points down, but we turned it around and went in three points up.

"I don't know if we just ran out of gas or it was a mental thing, but whatever the reason we didn't finish the deal.

"We were in a commanding position with 10 minutes to go and conceded a goal. Their substitutions seemed to have a greater impact than ours."

Instead of vying to defend their league crown, Clare must now regroup ahead of a relegation play-off against Dublin next weekend.

"We played them here so that's more than likely going to be in Parnell Park," he said. "So that's going to be an interesting challenge for sure."