Meath rescued an unlikely Allianz Football League Division 2 draw from their visit to Cork, but it could have been more as a last-minute foul on Graham Reilly was controversially adjudged to have occurred outside the penalty area.

They steadied with scores in the final three minutes of regulation play from a Colm O’Neill free and Barry O’Driscoll, which restored a narrow lead. But that late foul on Reilly, as he bore down on goal, was converted by Donal Lenihan in the 75th-minute for a share of the spoils.

Meath’s run of 1-6 in 15 minutes was remarkable given Cork’s dominance to that point, but they were met with no reply as Eamonn Wallace, Alan Forde and Donal Lenihan (free) points were followed by a goal from Donal Keogan. The corner-back ran the ball into the net in the 55-th minute after an incisive pass from Wallace.

A pair of wides followed by a shot from dual star James Toher which rebounded off the post looked costly, but it was one-way traffic and Lenihan levelled with a free before Sean Tobin kicked Meath ahead with five minutes to play.

The subsequent scramble for the points ultimately resulted in a draw which won’t do anything to restore the promotion chances or ease the relegation worries of either side.

It was a completely different story in the first-half as, after Bryan McMahon’s opener, Cork scored seven points in a row.

Only captain Paul Kerrigan survived Peader Healy’s cull of forwards from the Clare defeat and the Rebels responded with a much-improved display early doors.

The concession of a string of needless frees gave Cork a leg-up, with a pair of opportunities each for Mark Collins and O’Neill, although Collins missed the last of the four.

Meath crafted a goal chance in the 14th-minute as Cillian O’Sullivan sidestepped Ken O’Halloran but James Loughrey tracked back to make a crucial save. Cork countered with an O’Neill score, laid off by target-man Peter Kelleher, and that first score from play sparked Cork’s best spell.

Despite the loss of Aidan Walsh to a knee injury and Ian Maguire to a black card, they remained dominant in the middle and points quickly flowed from Kerrigan and O’Neill, with his fourth and fifth scores of the game. 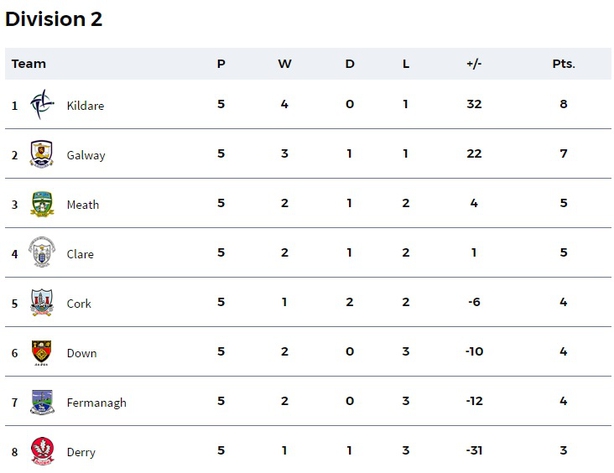 Meath were very elaborate in attack and Graham Reilly ended a 21-minute scoreless period after a long build-up. Further points from Alan Forde and Donal Lenihan, a free, cut the deficit to four.

Cork were in rampant form, though, with Kelleher a focal point in attack for O’Neill and Kerrigan. The full-forward tapped wide from close range when a goal looked probable but a run of score from O’Neill, Kelleher, Collins and Ruairi Deane doubled Cork’s advantage, 0-12 to 0-4.

A stoppage-time reply from McMahon made it a seven-point comeback needed after the break.

The Royals almost got the dream restart, as O’Sullivan picked out the unmarked Lenihan, but O’Halloran stood up to make a fine save. Two pointed frees from O’Neill resumed normal service at the far end as the lead hit nine points.

It took until the 52nd-minute for Meath to close within the seven-point mark but once they did that, the deficit tumbled to nothing.