On a busy night of action in the U21 football championship, Tyrone and Donegal finished level in the Ulster quarter-final, while Offaly edged out neighbours Laois to qualify for the Leinster final.

A '45 at the end of extra time from Lee Brennan saw Tyrone earn a replay with Donegal as the sides finished level at 0-14 each at Healy Park.

It was an enthralling contest throughout, with both sides hitting some fine scores, though Donegal will be cursing the 14 wides they hit during normal time. Michael Langan was the vistors' top scorer (0-06) and it was he who hit the levelling score to make it 0-11 each at the end of normal time.

A point from Eoghan Ban Gallagher put Declan Bonner's side ahead deep into the extra time period, but Breenan showed his composure to fire over the levelling score.

The replay will take place in Ballybofey next Wednesday. 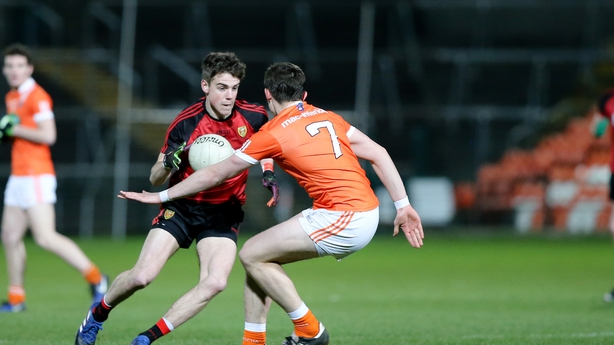 Elswwhere in Ulster, Armagh, courtesy of 2-07 from Shea Loye, ran out 2-13 to 0-12 winners over Down at the Athletic Grounds.

In Inniskeen, Derry knocked out the holders Monaghan on 3-10 to 1-11 scoreline, while Cavan hammered Fermanagh 2-19 to 0-04 at Brewster Park.

Offaly will meet either Dublin or Longford in the Leinster decider after a 2-09 to 2-08 victory over Laois at Netwatch Dr Cullen Park.

It was Laois who started the brightest, with Colm Murphy finding the net in the 13th minute.

Offaly didn't register their first score until the 18th minute - but it was a crucial one at that - as Cillian Farrell's green flag gave his side the impetus to lead 1-05 to 1-03 at the break.

In the 39th minute, Adam Mahon smashed home Offaly's second goal to put the Faithful 2-06 to 1-03 to the good.

The O'Moore County would cut the gap to the minimum as the game entered stoppage time but Shane Tierney hit the insurance point for Offaly to seal their place in the decider.

Cork and Kerry will contest the Munster final.

Michael Hurley came off the bench and netted 1-03 as the Rebels accounted for Limerick 2-10 to 0-10 at Páirc Uí Rinn, while Jack O'Connor's Kerry ran out comfortable 1-18 to 0-07 winners over Waterford in Dungarvan.