A record attendance witnessed an Ulster team winning the AIB All-Ireland Camogie Senior Club Championship for only the second time as Slaughtneil came out on top after a ding-dong battle with Sarsfields.

It is a first success for a Derry side and further torment for Galway, as it represented a fifth consecutive final defeat for the county’s representatives.

An aggregate of 6,123 came through the Croke Park turnstiles, and for the finals to attract a highest attendance ever while the games were also being streamed bore testimony to an increasing appeal.

Slaughtneil’s presence undoubtedly had a lot to do with that, the club having secured an historic three-timer at senior level in Ulster, while the footballers are also in an All-Ireland final on St Patrick’s Day.

This was had extra resonance though, as joint manager Thomas Cassidy had passed away just before the drawn Ulster final, having been the leading light in the development of camogie and hurling in the club.

It was Cassidy who enticed Antrim legend Dominic McKinley to join him and Damian McEldowney and the latter duo steered the ship magnificently through an emotionally testing period.

Cassidy’s three daughters Aoife, Brona and Eilís played two days after burying their father and were magnificent on the biggest stage of all.

As captain, Aoife had the honour of lifting the Bill & Agnes Carroll Cup before delivering a memorable speech entirely as Gaeilge in what was probably the ultimate tribute to her father.

Eilis went very close to being named player of the match, as must sweeper and ace freetaker Louise Dougan but there could be few arguments either against the award to Shannon Graham, who covered every blade of grass and emerged from countless rucks with possession.

Slaughtneil led by 0-07 to 0-06 at the break and then wasted a number of good opportunities early in the second half but the vital goal came five minutes in when Éilis Ní Chaiside showed tremendous vision to hit a reverse pass off the sod while running away from goal, back towards Kelly and the corner-forward made no mistake.

‘Hopper’ McGrath’s crew dug deep though and the switch of the manager’s youngest daughter (there were four on the pitch), 16-year-old Siobhán to the half-forward line had a significant impact as she flourished in the space and shot three points.

The Galway girls drew level but crucially they could not edge ahead despite having the upper hand. It was in this period that Dougan and Graham really showed their worth, repelling attack after attack.

Slaughtneil’s large support grew more vocal on the back of each clearance and the players lifted the bar once more.

They found the likes of Erica Leslie and Laura Ward in the Sarsfields rearguard in equally unyielding mood but after Graham was fouled, Dougan restored Slaughtneil’s lead in the 59th minute, ending a lengthy period for her side without a score from the time Eilís Ní Chaiside had exhibited tremendous stick-work to point deftly towards the end of the third quarter.

And it was the centre-forward who had the last say, driving over spectacularly while on the move and wide on the left. 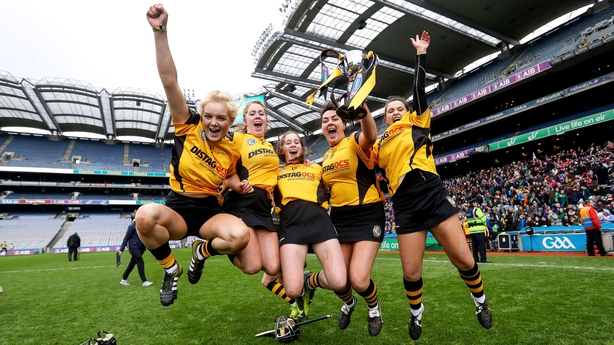 Meanwhile, Ciara Quirke scored 1-9 as Myshall added another chapter to their remarkable story, and that of Carlow camogie in recent years, by winning the AIB All-Ireland Camogie Intermediate Club title at Croke Park. They beat Tyrone's Eglish by 1-10 to 1-09.

Quirke had a number of clubmates by her side as she registered a hat-trick of goals during Carlow’s annexation of the All-Ireland Premier Junior crown last September, just 12 months after they had garnered the Junior A championship.

It is only four years since Myshall claimed a second consecutive All-Ireland Junior Club title, and their ascent up the rankings in tandem with the county team is symptomatic of the increasing depth of camogie in the country.