In Division 2A, there were lop-sided wins for Carlow and Westmeath, while Antrim edged past Kildare.

Craig Wall claimed two first half goals, with Chris Nolan grabbing their third in the first minute of the second half as they coasted to victory. 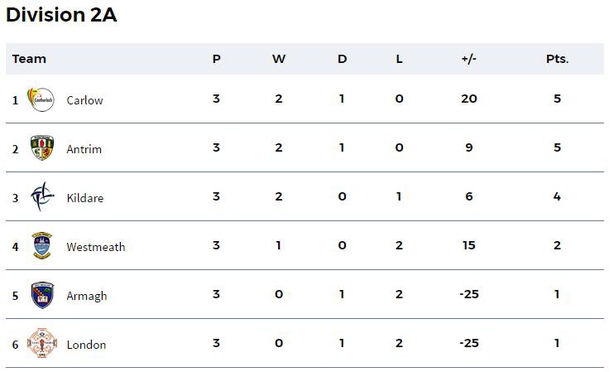 Westmeath made light work of Armagh, while Antrim reeled off the final four scores of the game against Kildare after the sides were level with 10 minutes to play, the Saffrons winning 1-16 to 1-12.

In 2B, Alan Grant claimed a late consolation goal for Derry, but they still lost out by 10 points to Wicklow after trailing by six at the interval.

Down finished their match against Mayo with 14 men after Caolan Taggart was sent off late on, but they were still far too strong for the Westerners, winning out 2-23 to 0-12.

Roscommon and Meath was postponed when the pitch at Athleague was deemed unplayable. 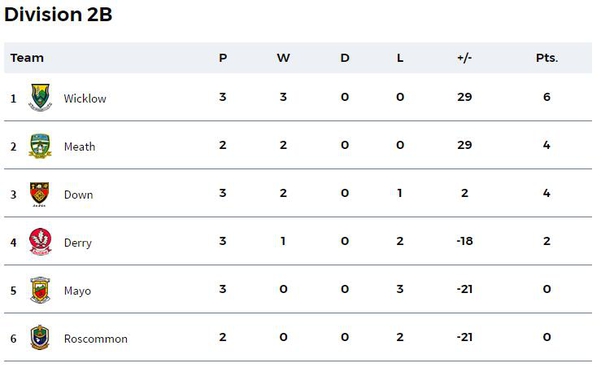 Monaghan made it four wins from four in 3A with a two-point win over Louth, while Donegal moved into second in the group after they got the better of their Ulster rivals Tyrone on a scoreline of 2-14 to 0-15.

Warwickshire continued their unbeaten run in 3B and sit top if the table after a two-point win over a Leitrim side yet to record their first win.

In the other game, Fermanagh leapfrogged Sligo with their first League victory of the campaign. 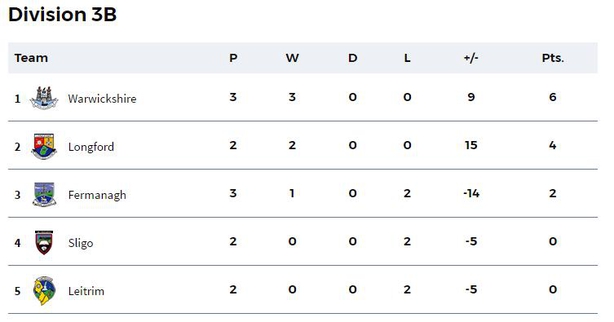