Cavan’s wait for a first win in Division 1 of the NFL since 2004 goes on after they were well beaten by a Donegal side who were in cruise control for most of this contest.

Rory Gallagher’s men were better in every department and, bar a sticky period just before the break, they were highly impressive throughout.

In the first dozen minutes or so, it looked like a case of men against boys. Donegal were dominant on both their own and Cavan’s kick-out and were able to break the ‘gain line’ with alarming ease.

Donegal, who could afford to kick six first-half wides, eased into a 0-2 to 0-0 lead with a pair of Michael Murphy frees and they extended that advantage with a superb 45-metre point from Ciaran Thompson.

Further scores from Darach O’Connor and Frank McGlynn made it 0-5 to 0-0 after 13 minutes and it was another nine minutes before Cavan opened their account through a Seanie Johnston free.

Hugh McFadden replied for Donegal but Cavan were finally starting to grow into the contest and they suddenly began to string some moves together. Their best spell followed, with Johnston tacking on another free and newcomer Conor Madden firing over a beauty from the right wing.

Disaster then struck the hosts when a late shoulder from Killian Clarke on Eoghan Ban Gallagher saw the Breffni captain dismissed on a straight red card. 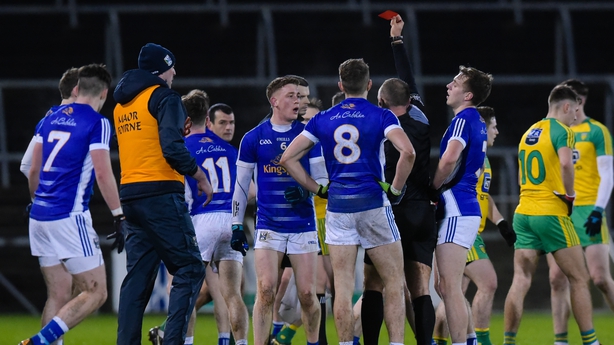 A melée broke out and when play resumed Cavan were playing with their remaining 14 men back in their defence for the final minutes of the half, doing well soak up Donegal pressure and nick a point from McKiernan (free) to go in just two down after a half in which they were out-played for the most part.

Donegal made the numerical advantage count immediately on the restart, McFadden pointing and then, within two minutes, the overlapping Eoin McHugh planted a terrific finish to the roof of the Cavan net to put six between them for the first time.

To their credit, Cavan knuckled down and pulled back an excellent point from Gearoid McKiernan and another from Ciaran Brady – either side of a well-taken Jamie Brennan effort – but when sub Cian Mackey missed a 20-metre free, their chance seemed to be gone.

That feeling was heightened when Donegal went up the other end and landed a well-struck free from Thompson moments later, before the lively Brennan sent over his second from play.

Man of the match Thompson then added two sweet strikes from identical positions on the left wing as Donegal coasted home.

Cavan kicked two long-range points from Dara McVeety and Madden but never looked remotely like troubling the visitors and found themselves down to 13 men when Cian Mackey was black-carded as manager Mattie McGleenan had already used six substitutes.

Thompson and McVeety – who ended the contest as a makeshift corner-forward, showing well in the new role – traded scores, as did Brennan and McKiernan in junk time, as the clock ticked down and Donegal free-wheeled home.