Conor McHugh grabbed his big chance for Dublin with 1-03 at Croke Park to help the Allianz football league holders extend their remarkable unbeaten streak to 33 games.

Attacker McHugh was starting back to back league games for the first time, and it was just his third start in either League or Championship, but he showed his full range of skills.

The 2014 U-21 Player of the Year hit an eighth minute goal to put Dublin on the road to victory and he added three more points with scores off either boot and a fisted effort.

Dean Rock was also excellent for the five-in-a-row chasing title holders and kicked eight points in what was a repeat of last October's All-Ireland final replay win for the Sky Blues.

The result leaves Dublin in a healthy position after four Division 1 games with two wins and two draws and they will be fancied to go on now and nail down a top-two finish to secure a final place.

But it was a disappointing evening for Mayo who came into the contest in strong form after bouncing back from their opening round loss to Monaghan with big wins over Kerry and Roscommon. 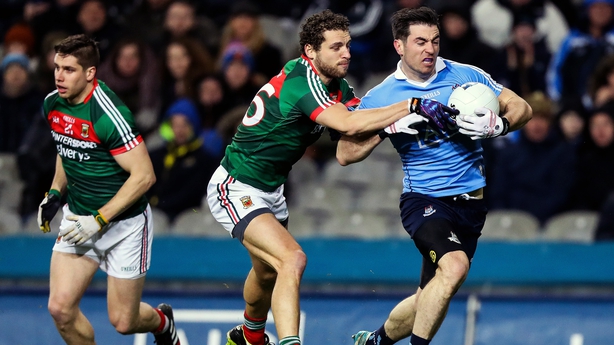 They were surprisingly held to just two points in the first-half and didn't hit their first point from open play until the 39th minute when Stephen Coen scored.

Dublin goalkeeper Stephen Cluxton did pull off two separate first-half saves though Mayo were generally poor in front of goals and kicked a number of poor wides.

Jim Gavin's Dubs were far more efficient at the other end and McHugh, whose only previous League start for Dublin before 2017 was against Roscommon last year, helped himself to 1-01 inside eight minutes.

His goal came from a mistake in the Mayo defence when David Clarke's kick-out was intercepted and worked back in to Ciaran Kilkenny who hand passed across for McHugh to palm in.

Man of the Match Philly McMahon and Rock added three first-half points between them to leave the hosts 1-05 to 0-02 up at the interval and sitting pretty. 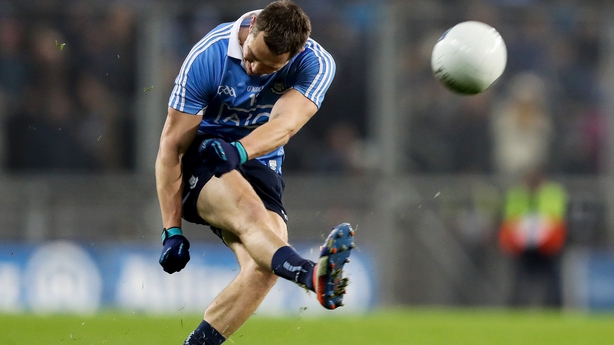 They could have been further clear because Eoghan O'Gara was wild with two goal attempts, blazing the first wide and the second across the face of the goals and out for a sideline kick under the Cusack Stand.

Michael Darragh Macauley also had a goal ruled out for striking the ball on the ground with his fist.

It was a fractious affair at times too with McMahon wrestling a Mayo player to the ground while Rock and Diarmuid O'Connor grappled in a separate incident. 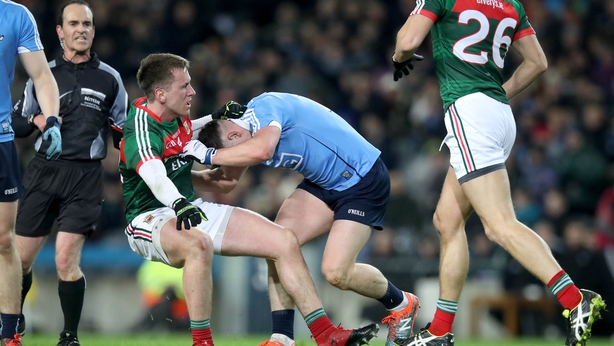 The second-half continued along similar lines with Dublin rarely operating outside their comfort zone.

Rock added four six more points, four from play, and was hauled down by Donie Vaughan, who was black carded for the challenge, in the 48th minute, leading to a penalty for Dublin.

Rock had a penalty saved against Tyrone so handed the duties to sub Paddy Andrews but his initial shot and two follow up efforts were all blocked by Clarke.

It hardly mattered as Dublin picked off scores at their ease in the final quarter. Rock converted three frees in a row before Paul Flynn, another substitute, boomed over a point from long range. 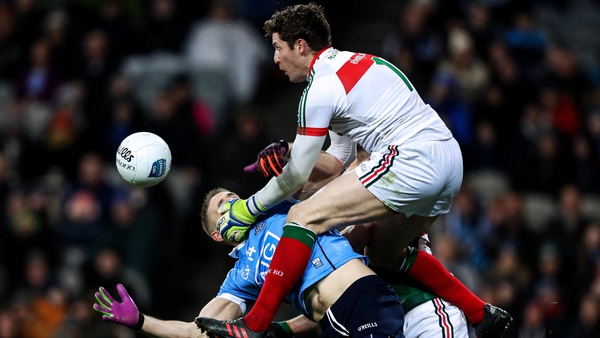