Three Peter Harte points and two from Tiernan McCann helped Tyrone lead bay 0-9 to 0-2 at half-time, and it could have been more, for Harte missed a penalty early on.

Monaghan had Fintan Kelly and Dermot Malone sent off early in the second half, but they fought back with scores from Conor McManus, Rory Beggan and Kieran Hughes.

Cavanagh then came off the bench to ensure the Red Hands held on for the win.

In front of a crowd of 5,635, Monaghan’s early pressure and possession produced nothing, and it was Tyrone who took the lead through Conor Meyler in the fourth minute.

And they missed a glorious chance in the tenth minute when a penalty was awarded for a foul on Mattie Donnelly, but Peter Harte sent the kick wide.

The frustration continued for the Farney men, however, as they found themselves confronted by two banks of defenders each time they attempted to carve a scoring opportunity.

Forced to go for the posts from distance, they racked up the wides, with Neil McAdam coming closest with an effort that came back off an upright. 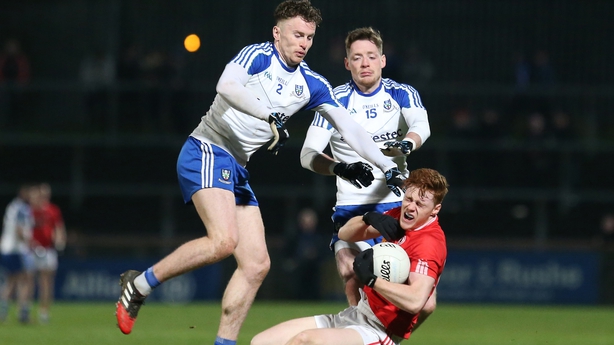 Meanwhile, the Red Hands troubled the Monaghan rearguard each time they swept from deep, with Tiernan McCann capping an incisive run with a point, and Darren McCurry and Frank Burns adding stylish scores

Jack McCarron finally registered Monaghan’s first score in the 26th minute, but that was immediately cancelled out by McCann’s stunning second and his side’s fifth from play.

Tyrone turned on the style in the closing stages of the half, with Harte and Justin McMahon floating over further scores, while Mattie Donnelly burst past three defenders to send a screamer crashing against a post.

Tyrone led by 0-9 to 0-2 at the break, and Monaghan suffered a further blow when defender Fintan Kelly was shown a second yellow card just a minute after the restart, and they were down to 14 men.

Nevertheless, they carved their first real opening through Conor McManus and Conor McCarthy, but Dessie Ward’s shot was superbly saved by Mickey O’Neill, with McManus converting the resultant ’45.

But in the 40th minute, the Farney challenge threatened to fall apart when they were reduced to 13 men, Dermot Malone shown a straight red card by referee Padraig Hughes

But the very opposite was the case. They played like men possessed, displaying incredible resilience and intensity to take the game fearlessly to Tyrone.

Goalkeeper Rory Beggan arrowed over a couple of long range frees, and a fabulous fetch and point from Kieran Hughes, now pushed up to full forward, narrowed the gap to three points.

Cavanagh’s introduction was crucial for a Tyrone side just hanging in there, with the former Footballer of the Year hitting three vital scores, two of them spectacular efforts from play, to steady the ship.

Monaghan continued to fight back, with points from McManus and McCarron, but the Red Hand held on.