Defending champions Dublin eased past the challenge of Westmeath in tonight’s Eirgird Leinster Under-21 football quarter-final, while Longford and Offaly also advanced to provincial semi-finals.

Goals from Aaron Byrne in either half propelled the Dubs to a 14-point win over the home side at Lakepoint Park as they continue their quest for four-in-a-row in Leinster under Dessie Farrell.

Westmeath began brightly in wet and windy conditions in Mulligar and knocked over the opening two scores of the game before the visitors settled into the match.

With the wind advantage, Con O’Callaghan, fresh from his hurling exploits with Cuala, landed a couple of scores, while the crossbar came to Westmeath’s rescue when Seán Bugler went close to raising second green flag. 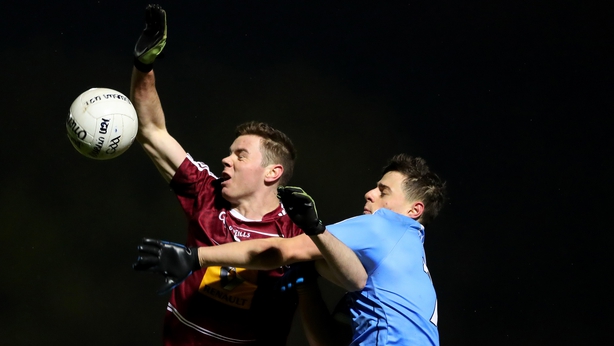 The Dubs led 1-06 to 0-4 at the interval and it was simply one-way traffic from the resumption. O’Callaghan and Byrne were again prominent in the scoring stakes, while substitutes Colm Basquel and Chris Sallier also added to their tally.

Byrne’s second goal rubbed salt into the wounds, and Dublin will now face Longford in the semi-final after they had two points to spare over Kildare.

The foundations for victory were laid with a blistering start at Hawkfield and they hit 2-02 before the Lilywhites could muster their first score and only score of the half, with Nigel Rabbitt raising the green flag twice in the opening 11 minutes.

The rest of the half was keenly fought, but low on scores as Longford led 2-03 to 0-01, but the Lilywhites reeled off nine points without reply after the break and with just over 10 minutes left on the clock, they led by the bare minimum.

It was Longford however who finished strong, with Connor Berry, and Jayson Matthews sealing the win on a scoreline of 2-06 to 0-10.

Offaly had a goal to spare against Wexford in their quarter-final clash.

The sides shared four points in the opening 30 minutes, but Jordan Hughes’ goal three minutes after the resumption proved to be the crucial score of the game.

The Yellowbellies rallied with the last four points, but couldn’t bridge the gap and the Faithful County progressed 1-06 to 0-06.

They await the winners of Laois and Louth after the Wee County got the better of Wicklow 1-13 to 1-09.

Ross McNally’s first-half goal gave the victors a three-point cushion at the break, and strong showings from Ciaran Downey and Ryan Burns sealed their passage to a quarter-final meeting with Laois.