Cuala will be the first Dublin club to appear in an All-Ireland Club SHC final, after securing their place with a 3-21 to 2-11 win over Ulster champions Slaughtneil at the Athletic Grounds.

They turned in a commanding performance to shatter the treble dream of a club whose footballers and camogie players are set to appear in All-Ireland deciders.

Sean Treacy added a second goal, and while the Derry men pulled back goals through Gerlad Bradley and Se McGuigan, Cuala hit the net for a third time late on through Niall Carty.

All but two of the Slaughtneil team are also members of the football squad chasing the All-Ireland title on St Patrick’s Day.

Early on, it was end-to-end hurling with Chrissy McKaigue and Brendan Rogers trading scores with David Treacy and Mark Schutte.

But Treacy got his eye in with placed balls, sending a couple of difficult efforts between the posts to give the Leinster champions a 0-4 to 0-2 advantage by the eighth minute.

See you in Croker @CualaCLG!! What a performance by the Dalkey men!! An All Ireland final awaits!! #TheToughest pic.twitter.com/ryreeectNr

Jake Malone, Sean Moran and Darragh O’Connell anchored a solid defensive effort as the Dubliners got a firm foothold in the tie, with O’Connell’s distribution prising openings in the Emmet’s cover.

And they got their reward in the 11th minute when a well worked move ended with Con O’Callaghan smashing an unstoppable shot to the top corner of the net.

Confidence now coursed through the veins of the Cuala men as the unerring Treacy stretched the advantage.

Sean Moran provided a superb assist out of defence for Treacy to land his first from play, and they led by 1-8 to 0-3 with ten minutes of the first half still to play.

Much more impressive in their support play and stick work, Cuala’s discipline restricted their opponents to a minimum of scoring chances, though McKaigue, Rogers and Cormac O’Doherty did pull back points. 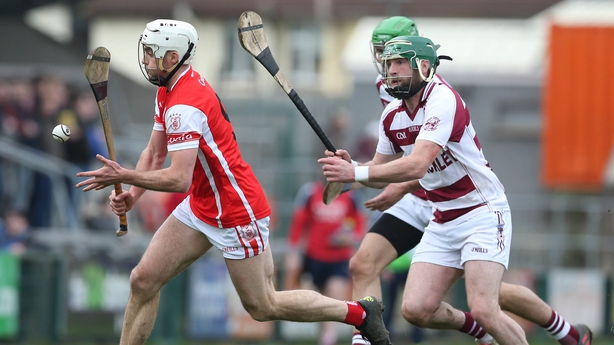 Sean Treacy skipped past his marker to bury a second goal just seconds after the restart, but the Oak Leaf men responded immediately with a goal of their own, scrambled home by Gerald Bradley.

Sean Moran landed a monster free from 120 metres and Cronan dinked over another on the run as the margin swelled to 14 inside the opening ten minutes of the second half.

A superb Oisn Doherty save denied Con O’Callaghan a second goal, but couldn’t half the Cuala march, with O’Callaghan bringing his tally to 1-3.

Cormac O’Doherty and Gerald Bradleyregistered badly needed scores at the other end, but with Moran turning in an immense display at the back, they were unable to make sufficient inroads into a well organised Cuala defence.

And it went from bad to worse for Slaughtneil when Cormac McKenna picked up a second booking in the 51st minute.

Despite the setback, they grabbed a goal through Se McGuigan, but Cuala inevitably had the last say as Mark Schutte unselfishly off-loaded to substitute Niall Carty for goal number three.