University Of Limerick retained the Ashbourne Cup and made it two wins in three seasons when recovering from the concession of an early goal to record a deserved victory over University College Cork at Abbotstown.

This was a repeat of last year’s final, where UL snatched the famed trophy from their rivals’ grasp with an injury-time goal from Laura McMahon but there was no need for such a dramatic intervention this time around.

Supporters of the skull and crossbones flag were given a tremendous boost when Lauren Callanan found the net soon after the throw-in but with so much experience in their side, UL were never likely to lose their composure.

Having said that, it was a first-year student, Waterford ace Beth Carton who got them on the board with a neat point.

Before long, the Shannonsiders were ahead, as the player of the match Ereena Fryday breached the UCC defences with a good goal.

There was so much talent in evidence in both line-ups, that a period of to-and-fro was inevitable. Kerry dynamo Patrice Diggin formed a hugely effective midfield pairing with industrious skipper Fryday for UL, while Róisín Howard was looking very threatening in attack. 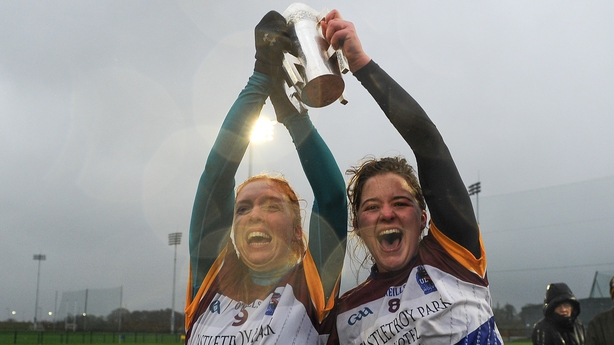 UCC could boast a galaxy of All-Ireland winners in their line-up and in Cork trio, Hannah Looney, Pamela Mackey and her sister Katrina, three of the game’s finest performers.

Carton was revelling in her debut Ashbourne campaign also and she brought her tally to three points as UL opened up a two-point lead at the break, 1-5 to 1-3, although UCC would rue their failure to gain any return from a penalty.

The Baltic weather conditions were making it extremely difficult but UCC were determined to gain their revenge for last year’s heartbreaking defeat, Looney and Katrina Mackey bringing them back level.

It looked like the Leesiders might be making a winning move but they were stopped completely in their tracks by Caoimhe Lyons’s goal and in a game of this nature, one felt that UCC would need a similar score to rescue themselves.

Having said that, the Cork college did get back to within one, thanks to a brace of frees by Katrina Mackey but it was UL that found another gear, Aoife McGrath raising a white flag ahead of sensational score from distance by Diggin, to put a goal between them once more.

And it was Diggin, who scored eight points in last year’s final, who had the final say at the National Sports Campus.