Laois snatched a win over Armagh with a point in the sixth minute of additional time, while Sligo, Offaly and Louth all enjoyed wins in Division 3.

Peter Creedon’s side will take great hear from their battling win at the Athletic Grounds following their opening round defeat to Louth, with Darren Strong the match-winner in a game that ended with two red cards.

The home side reeled off the last three points of the first half to ensure it was level at the break, but Kieran McGeeney’s side pushed on after the interval.

Stefan Campbell’s point with 14 minutes remaining gave them a five-point advantage, but Donie Kingston brought the visitors to within a point when he raised the green flag.

Kingston followed that with Laois’ three following points before Darren Strong hit the match winner after 41 minutes of the second half.

Paul Kingston and Aidan Forker were given their marching orders just before the final whistle.

There was controversy in Drogheda as Longford were unhappy that their game was blown up a minute early as they chased an equalising score against Louth.

The Wee County looked to be coasting to victory when Ryan Burns’ 55th minute point gave the home side a five-point lead, but Longford fought back and Seán McCromack’s free meant they just trailed by a point with four minutes of additional time indicated by the match officials.

The game was ended in the 73rd minute with Longford in possession and Louth manager Colin Kelly admitted afterwards he would be unhappy if he was in a similar situation.

In O’Connor Park, Offaly enjoyed a facile win over Antrim, who are awaiting their first win in the League.

The Faithful County led 0-09 to 0-04 at the interval, but the Ulster side folded after the break, with Matthew Fitzpatrick getting a consolation goal in a 0-23 to 1-07 loss.

Tipperary rallied in front of 749 fans at Semple Stadium, but Sligo left Thurles with the win.

Goals from Kyle Cawley and Niall Murphy laid the foundations for victory with first-half goals, while Tipperary’s challenge was made harder with Jimmy Feehan was dismissed for second yellow card.

Tipp finished the game with 1-06 without reply, but it was too little too late. 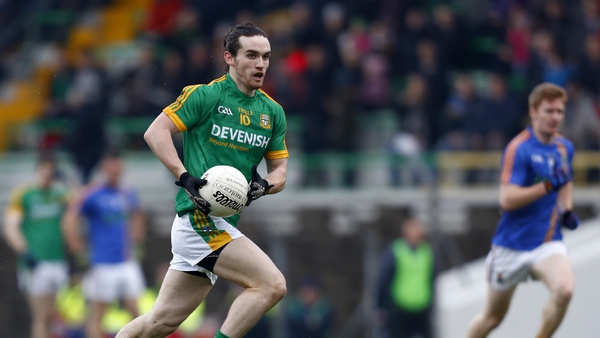 Meath trounce Derry to get back on track