Ger Brennan has said St Vincent's imports are as much a part of the community as the Dubs in the side and insisted the club has never chased or recruited players.

It's led to criticism in some quarters and a perception that Vincent's have been poaching players but Brennan insisted it was merely a symptom of people coming to the capital for work.

“Dublin is the capital of our country, there's over a million people there living and working," he told RTÉ Sport after his side's 1-16 to 0-12 victory against Rhode on Sunday afternoon.

There’s definitely no policy nor has there ever been a policy within Vincent’s to be recruiting players or chasing players.

"If a guy is living and working in the area and he wants to play Gaelic football, then why not?

“There’s definitely no policy nor has there ever been a policy within Vincent’s to be recruiting players or chasing players.

"You've Enda Varley there, Lorcan Smyth, Fiachra Breathnach and Brendan has been playing with us for years and years. All those guys are living and working in the area. They've added quite a bit to the squad this year." 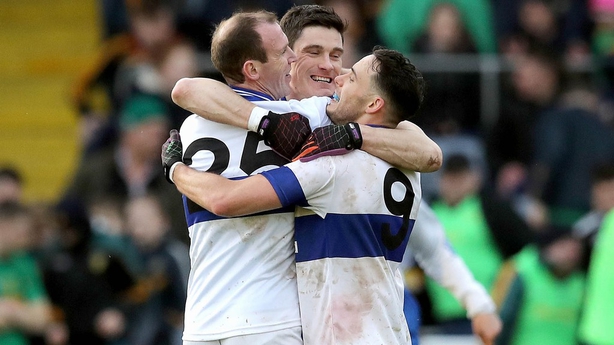 Michael Savage's brilliant diving save denied Rúairí McNamee from the spot, and while Brennan was quick to hail his team-mate's heroics, he felt his own punishment didn't fit the crime.

“There was a tangle of legs. It was a peno definitely, but it wasn’t intentional so I feel somewhat hard done by," the two-time All-Ireland-winner with Dublin said.

"It was a booking. Was it a black card? I thought a black card was for if you intentionally took somebody down and that wasn’t the case.

“If you look back on some of our Dublin championship performances this year we’ve been quite loose at the back and Mick has stood up to the mark with a lot of unbelievable saves.

"We weren’t surprised that he saved it. I suppose it took the sting out of a momentum change that was there for Rhode, with me going off, but Savo, he’s a super keeper.

“Looking at this Rhode team and how successful they’ve been in Offaly over the years and indeed in Leinster without fully winning a Leinster Championship, we knew how tough it was going to be. We were very much tuned in and focused."