St Vincent's Gavin Burke hailed Diarmuid Connolly as "the best player in the country" after the Dublin star led his club to the Leinster SFC title on Sunday afternoon.

Vins inflicted a 1-16 to 0-12 defeat on Offaly side Rhode to keep alive their All-Ireland quest, with Connolly once again a talismanic figure at O’Moore Park, notching 1-2 from play.

The attacker has had an action-packed 2016 between club and county duties, but Burke said his attitude and commitment to the club have never wavered.

“He’s a massive player for us," Burke told RTÉ Sport. "He is the best player in the country and he’s always had time for Vincent’s.

Last year was very, very tough on us, losing to Ballyboden and then watching them go on to win an All-Ireland.

"He never switches off when he’s finished with Dublin. He just slots right back in. There’s no ego with him at all, he’s just another player. He’s always produced the goods for us."

For Burke, it was the game's defining moment.

“It was tough going out there," he added. "The pitch was very heavy and Rhode were threatening right up to the end. 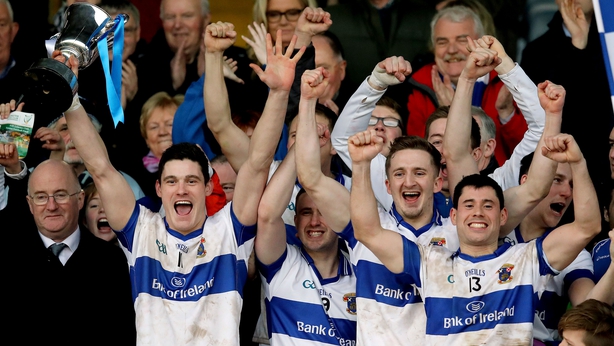 "[The penalty miss] was a big turning point. We went down and got a point and that left us five points up rather than being a point up.

"Fair play to Michael Savage. That’s the small things that these games turn on and thankfully it went in our favour."

Vins are a team on a mission this year after the pain of a Dublin county final loss last year. It still stings, and Burke wants the ultimate glory to soothe the pain.

“Last year was very, very tough on us, losing to Ballyboden and then watching them go on to win an All-Ireland.

"We really knuckled down this year. We’ve had our ups and downs but there’s absolutely no question of the hunger in this group. We want to go all the way.

“It’s been a long year. We’ve a few weeks off; we’ll enjoy Christmas now and keep ticking over. Then we’ll go hell for leather in January for an All-Ireland semi-final."