By Kevin Egan at O'Moore Park

Rhode’s luckless run in Leinster finals continued this afternoon when they succumbed to a 1-16 to 0-12 defeat to Dublin champions St Vincent’s at O’Moore Park.

The seven-point victory now moves the Marino club alongside Portlaoise at the top of the Leinster roll of honour with seven wins in total.

Tommy Conroy’s club started the game as the strongest of favourites, conceding a four or five point handicap with most bookmakers, but there was little between the sides from general play in the first half.

Both attacking units looked potent in possession, both goalkeepers relied heavily on short kickouts so possession was evenly shared, and there were goal chances at both ends.

However Rhode seemed far more prone to errors and these proved to be hugely costly, not least Alan McNamee’s misplaced handpass after six minutes that led to St Vincent’s securing a key turnover and setting up Diarmuid Connolly for the game’s only goal.

Several St Vincent’s scores came from similar Rhode mistakes out the field and the threat posed by Niall McNamee kept the Offaly side in contention, while Darren Garry, Paul McPadden and Conor McNamee also chipped in with key scores.

Perhaps the game’s key swing moment came immediately before half-time when Ger Brennan was deemed to have tripped Niall McNamee as they attempted to contest Conor McNamee’s low centred delivery, but while Brennan was shown a black card, Michael Savage came to his side’s rescue with a great diving save to deny Rúairí McNamee.

Twenty seconds later the Dublin side had swept down the field and added another point through Gavin Burke to put five points between the sides at the interval, and that lead proved insurmountable. At no stage in the second half did the favourites lead by less than four points.

A brace of scores from Darren Garry and Ciarán Heavey gave Rhode a little momentum but four points without reply between the 40th and 50th minute consolidated St Vincents’ position and left them with a comfortable cushion in the closing stages.

Late goal chances for Darren Garry and Niall McNamee failed to hit the target and preserved St Vincent’s record of coming through this Leinster campaign without conceding a goal, while their victory sets up what should be a fascinating semi-final clash with Slaughtneil of Derry next February after they eased past St Kieran's of London. 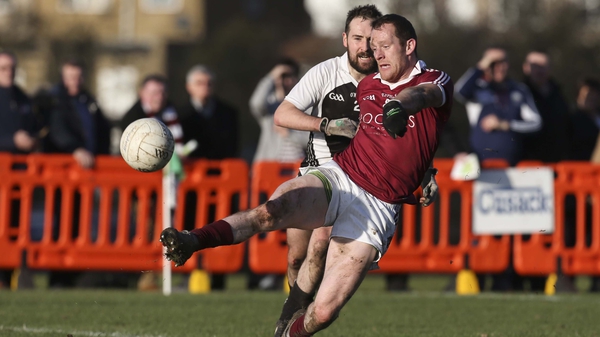 Slaughtneil see off St Kiernan's to book date with Vincent's