Con O'Callaghan gave another glimpse of his remarkable talent as Cuala streaked to a famous AIB Leinster club hurling title success, the first for a Dublin club since 1980.

The Dublin senior footballer didn't start the county hurling final but has been Cuala's standout performer since with an incredible 6-10 in just three provincial games.

The 2014 dual Leinster minor finalist with Dublin hit 1-04 in total here and 1-02 in the first-half as the Dalkey outfit surged into a lead that they would hold onto to secure a maiden title.

Free-taker David Treacy was excellent too and overcame a stuttering start to finish with 0-11 as the back to back Dublin champions laid last year's decider defeat to Oulart-The Ballagh to rest.

Colm Cronin and Mark Schutte bagged the other goals in a comprehensive win over the 2010 Leinster champions.

Mattie Kenny's men will be strong favourites heading into the February 4 All-Ireland semi-final with Slaughtneil and will feel that a final place on March 17 beckons.

O'Callaghan came into the contest in top form after shooing 4-3 and 1-3 tallies in the wins over Borris-Kilcotton of Laois and Carlow champions St Mullins.

The Kilkenny kingpins were clearly wary of him but simply couldn't handle his raw power and pace, particularly in the first-half.

In that period the UCD commerce student had a direct influence on 2-04 of Cuala's 2-08 tally. 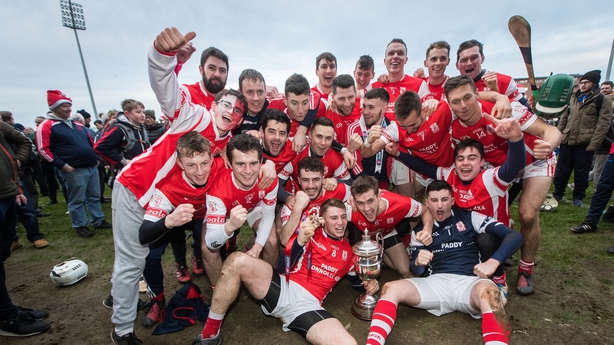 He scored 1-02 in the half himself, laid on the final pass after good work down the right for Cronin's seventh minute goal and won two frees that were converted.

Andy Kearns lined up on O'Callaghan initially though Alan O'Brien finished the half on him. Neither had much luck.

Cuala led 2-08 to to 0-09 at the break but kicked themselves for not being further clear.

Dublin attacker Schutte was in good form, particularly under their own puck-outs and was set free by Sean Treacy to play in O'Callaghan for Cuala's second goal after 22 minutes.

But fellow county man David Treacy had a troubled start and pucked away 1-03 in the first 20 minutes. That comprised two wides, a skewed shot that dropped short and a goal chance that was saved.

The placed ball expert still finished the half with 0-05 though Cuala weren't out of the woods by any means despite their authority.

They were concerned when O'Loughlin Gaels restarted strongly and edged the third quarter of the game to reduced the deficit to just three points.

Kilkenny player Mark Bergin picked off the points for O'Loughlins from frees and they were just three behind on three occasions throughout the half.

But that was as close as they got and bursts of three and two points without reply from Cuala put clear daylight between them again.

O'Callaghan added two second-half points and Schutte nailed their third goal deep into injury-time. He pounced when a long range David Treacy free was only half cleared and fired to the top left corner of the net.