After calling time on a 12-year career in the Kilkenny jersey, Eoin Larkin believes that Brian Cody still possesses the desire to bring even more hurling silverware to the Marble County.

Since making his championship debut against Offaly in 2005, Larkin went on to win eight All-Ireland medals, 10 Leinster SHC medals, six National Hurling League medals, two All Stars and was named Hurler of the Year in 2008.

An impressive trophy haul, all achieved under the tutelage of the GAA’s most successful inter-county manager.

In a recent newspaper column, The Sunday Game analyst and former Clare and Galway manager Ger Loughnane argued that Brian Cody should have stepped aside this year to give predecessor something to build on for the future.

However, Larkin is quite adamant that Cody has much more to give to the Black and Amber cause and is the right man that can successfully oversee the emergence of new talent.

Speaking on 2fm’s Game On, the James Stephen’s clubman said: “The right man is at the helm again for 2017 to pull all that together.

"If you go back before 2005, there wasn't that many minor and U-21 successes but still we managed to get it all together and won four All-Irelands in a row. Brian is the right man to have in place to ensure that something similar can happen again.

"He has the knack for picking the right players, working with those players and getting the very best out of them. From the time I started with Kilkenny, my game has changed so much thanks to him giving me little pointers.

"He's definitely the right man for Kilkenny as long as he wants to do the job. He still has that burning desire and I have no doubt he will bring us more success." 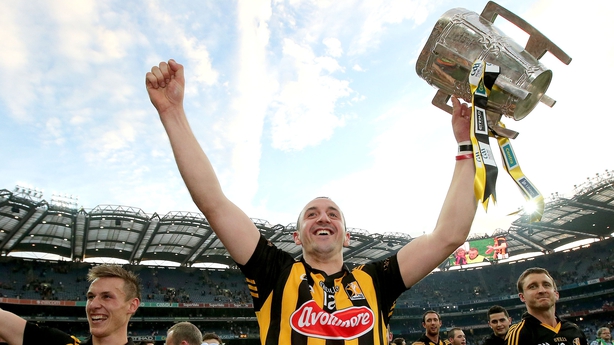 On his decision to end his career at this moment in time, Larkin certainly has no regrets, even though his last game with the Cats ended in defeat as their quest for an All-Ireland hat-trick was ended by Tipperary on the first Sunday in September.

“There was always little nagging in the back of my mind after the loss to Tipp but I knew the time was right now,” the 32-year-old revealed.

"If we had to win it would have been great. It's not the way I would have planned it but it's just the way it happened.

“I only came to the decision yesterday. When you know your time is up, your time is up. That's the way I feel at the moment. I've had a great 12 years with Kilkenny and it's time to move on and give my all to the club now.”

Henry Shefflin and Brian Hogan have led tributes to their former team-mate.

Shefflin, who retired last year, wrote on Twitter: “Soldier off the field, General on the field, most selfless player to share a field with.

Hogan added: "Congratulations on some career. [He] had everything you want in a forward including savage work ethic."