Five-time All-Ireland SFC winner Marc Ó Sé has opted to call time on his illustrious career with Kerry’s footballers at the age of 36.

Ó Sé’s departure marks the end of one of the most enduring dynasties in the history of Gaelic football.

The right corner-back’s older brothers, Darragh and Tomás, were already mainstays of the Kerry side when he made his senior inter-county debut under his uncle Páidí in 2002.

“I suppose it was in my head for the year," said Marc, speaking on RTÉ Raidió na Gaeltachta's As Saol ó Dheas.

"I wasn’t getting my place this year. I didn’t get my game in the Munster final. I was getting older, 36, and maybe the legs weren’t as good. I made the decision before the semi-final that I’d see out the year with Kerry and then that would be it for me.”

From the start of his Kingdom career 14 years ago he went on to make 176 league and championship appearances for the county.

Ó Sé made it all the way to the Croke Park decider in his rookie season, only for Armagh to dash his hopes of All-Ireland glory at the first attempt.

Ó Sé’s side fell to Tyrone at the semi-final stage a year later before a first All-Ireland title came after a comprehensive win over Mayo in 2004.

Kerry fell at the final hurdle in 2005 when Mickey Harte masterminded a surprise win for the Red Hands, but 2006 saw Ó Sé collect second All-Ireland when Kerry overwhelmed a feeble Mayo side.

Ó Sé was also on the winning side in 2009 against bitter rivals Cork and in 2014 when Donegal provided the opposition, but it was arguably his feats in 2007 that will give An Ghaeltacht clubman the most personal satisfaction.

Ó Sé won an All Star and was named Footballer of the Year in a campaign that culminated with victory over Cork on the third Sunday in September.

Three National League titles also came his way, while Ó Sé captured two Kerry titles and a Munster crown with his club side.

In a statement released by the county board, Ó Sé said: “If you told me as a child that I would go on and win All-Ireland's with my heroes, I would have said I was dreaming, so to be able to do that has been one of the greatest thrills of my life.

“To play alongside some of the greatest players to ever play the game is something I will always cherish.

“I will continue to play football with my club, An Ghaeltacht, who have recently gained promotion to Division 1 of the county league and I look forward to playing with some exceptional young footballers in our great club.

Having ability and talent gives you a chance . Add in passion, workrate ,tradition and pride and you become a legend. Well done @osemarc2

“I wish the Kerry team all the best in the years ahead and I have no doubt that they will recapture Sam in the not too distant future.

“Of course I will miss playing with Kerry, miss the craic and friendships with the lads, and most of all miss those big days out in Croke Park, but now I look forward to my future with my partner and my young family. 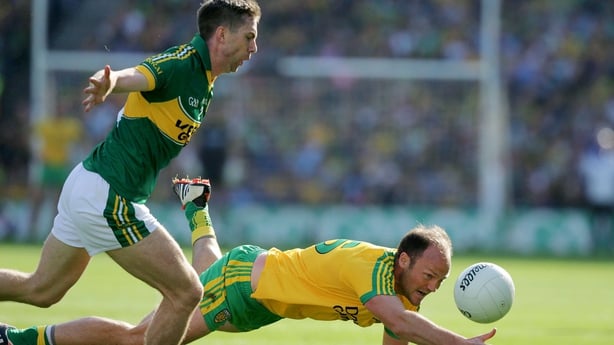 Kerry manager Eamonn Fitzmaurice said of the departing star: “He led by example and helped to drive a culture of excellence within the set-up.

“Be it excelling in the football sessions, winning runs, driving gym sessions or speaking in meetings, Marc was to the forefront of everything we did.

“Many of our younger players learned a huge amount from him as he displayed to them what it takes to be a Kerry footballer and the responsibilities that go with that. The respect within the group for him is absolute.

“While he is taking a well deserved sabbatical from Kerry at the moment, I can see him back in a management capacity in the near future.”