Dublin retained the Sam Maguire Cup for the first time since 1977 with a 1-15 to 1-14 replay win over Mayo at Croke Park.

Heartbreak visited Mayo once again, and they are still searching for their first title since 1951.

The Connacht county has now lost eight finals since their last success, following this narrow one-point defeat in an absorbing re-match.

Diarmuid Connolly’s second-half penalty gave the Dubs the vital score which helped them reach out for their fourth Sam Maguire Cup success in six years, and their 26th in all.

Dean Rock claimed the championship top scorer title with a nine-point haul, but he was matched on the day by the 0-09 of Cillian O’Connor, whose late equaliser a fortnight ago had set up this thrilling re-match.

O’Connor had an opportunity to do it again, but missed a difficult free deep into stoppage time.

In front of a crowd of 82,249, Dublin wasted no time in injecting the intensity that had been missing a fortnight earlier, racing into a four point lead, with Dean Rock hitting three - two of them from play.

Stephen Rochfort’s gamble in bringing in goalkeeper Rob Hennelly failed to pay off in those early stages, his kick-outs putting his side undue under pressure and contributing to the concession of some of those scores.

But the Mayo men settled, and they were level by the 13th minute with a four-point salvo of their own. Patrick Durcan got them going, and Cillian O’Connor stroked over a couple of frees.

Rock had just edged the champions two in front when the Connacht men struck for a brilliant goal in the 18th minute. 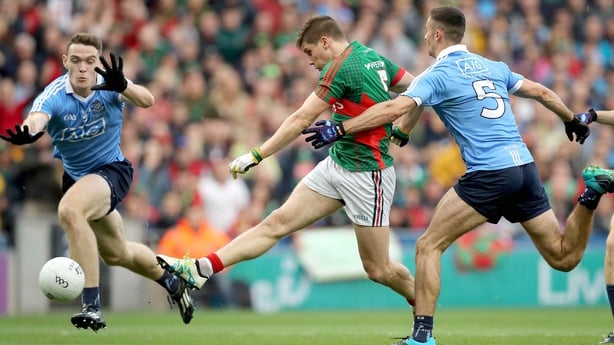 Aidan O’Shea’s off-load was perfectly timed for Lee Keegan coming off his shoulder to fire his shot to the bottom corner of Stephen Cluxtons’ net.

Jonny Cooper made a couple of vital interventions, but his game was brought to an end by a black card in the 19th minute.

Nevertheless, Rock continued to hit the target form frees, claiming eight scores in the first half alone as the Dubs nudged back in front.

Colm Boyle got forward to win the free from which O’Connor levelled for the third time, but Hennelly’s issues with kick-outs were to have further consequences, contributing to Lee Keegan’s 35th minute black card, and another Dublin score.

A handful of stoppage time skirmishes led to bookings for Dublin pair Connolly and John Small and Mayo’s Donal Vaughan, as the half ended with bristling tension, the defending champions ahead by 0-10 to 1-6.

Mayo came out for the second half minus another key defender, the injured Vaughan, but charged ahead with scores from the O’Connor brothers.

But Hennelly’s game ended in devastation, after he fumbled a harmless Paul Flynn delivery into the arms of Andrews, and dragged down the attacker as he went for goal.

The ‘keeper was black-carded, with David Clarke coming in to face the penalty, which Connolly drilled clinically to the corner of the net on 42 minutes. 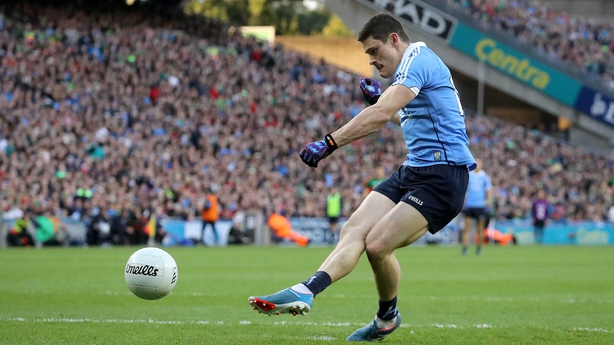 Brendan Harrison and Stephen Coen defended heroically as the Dubs swept forward, keeping Kevin McManamon out, and countering for Kevin McLoughlin to cut the deficit.

Mick Fitzsimons and James McCarthy stood tall and strong in getting in vital challenges to help the Dubs through a difficult spell, and the strength of their bench came to the fore, with Bernard Brogan and Cormac Costello (2) coming in to kick scores for a three points lead.

Brian Fenton’s strong influence around the middle helped the Dubs keep their opponents at arm’s length as Costello’s third made it a two point game in stoppage time.

Nevertheless, the brave men of the west came back again with a ninth O’Connor free, and he had a chance to send the decider to extra-time, but his placed ball attempt deep into stoppage time tailed left and narrowly wide.