Midfielder Jacinta Brady claimed the player of the match award as the Midlanders ended a 19-year wait for national silverware.

In a quite incredible game, Longford overturned a six-point half-time deficit to win with seven to spare.

Seven minutes before half-time, Longford trailed by 0-2 to 1-8 but three unanswered points before the break kept Bohan’s charges in touch, down by 0-5 to 1-8.

The second half was superb from a Longford viewpoint as substitutes Aoife Darcy and Aisling Reynolds made big scoring impacts.

Bohan ran his bench early - three subs introduced in the first half and another at the break.

Ultimately, it was a run of 3-08 without reply that ensured West County Hotel Cup glory for Longford – as they tagged on an unanswered 3-05 after the interval.

Antrim went without a score from the 23rd minute until 12 minutes from time as Longford ran riot.

Brady’s 34th minute goal sparked the revival but Longford’s next two goals had more than a hint of good fortune about them.

The approach work was excellent, however, but Emer Heaney’s 36th minute goal was deflected into the net by back-tracking Sarah Haughey.

As Longford continued to press, they were eight points clear when Orla Noonan fired over a fine point in the 42nd minute – a score that represented a massive 17-point turnaround when their first half deficit is taken into account.

It appeared that Antrim were on their way to a third junior title win in eight seasons when they stormed into that big first half lead.

Claire Timoney banged home a super goal in the 12th minute to rock Longford back on their heels and it appeared that Longford were out of luck before half-time when Heaney’s shot struck the crossbar.

But they were rewarded with a sparkling second half display and Aishling Greene’s goal with six minutes remaining was the icing on the cake for electric Longford. 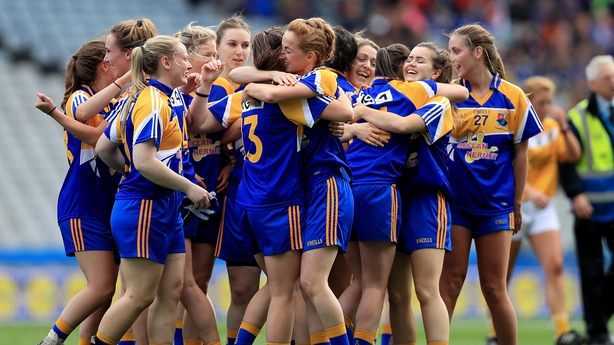