Cork are TG4 All-Ireland ladies senior football champions for the sixth year in a row and 11th time in 12 seasons after a controversial 1-07 to 1-06 win over Dublin.

The Rebelettes sealed six-in-a-row with a narrow one-point victory in front of a record 34,445 attendance at Croke Park – as Ephie Fitzgerald capped his first year in charge with the ultimate reward.

It’s the third successive year that Cork have seen off the Sky Blues in the Brendan Martin Cup decider and they turned the screw in the second half to get the job done in a low-scoring encounter.

However, with just a point between the sides at full-time, a disallowed Carla Rowe effort that looked a certain score in the first half will be a post-game bone of contention.

Dublin were four points down in the final minute before Sinéad Aherne netted a penalty for the Sky Blues with essentially the last kick of the game.

Cork’s Rena Buckley received the player of the match award and it was fully merited as the Leesiders turned up the heat and built up a decisive lead at a crucial stage in the second half.

The sides were level at 1-3 to 0-6 with 20 minutes remaining before Cork struck for four unanswered points between the 48th and 54th minutes.

Doireann O’Sullivan scored three of them – each equally brilliant in its own right as Orla Finn also chipped in with a valuable score.

Dublin scored just 1-02 in the second half – including Aherne’s penalty – as Cork pulled down the shutters. 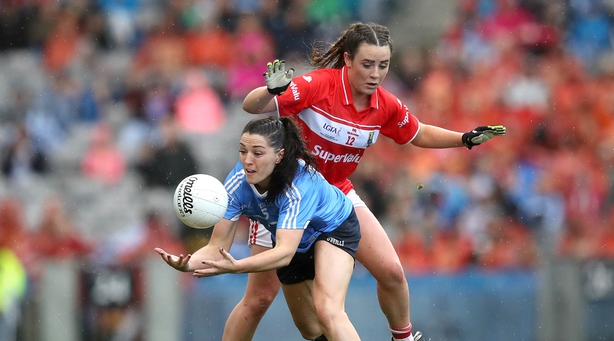 They’ll argue that it should have been a two-point advantage as TV replays indicated that Rowe’s 22nd-minute effort clipped the inside of Martina O’Brien’s right hand upright and went over the bar. The kick was waved wide.

Cork moved two points clear early on but Dublin worked their way back into contention and they were level seven minutes before the break, Lyndsey Davey slotting over the equalising score.

And Aherne was on target two minutes before the interval with the lead score as Dublin hit the front for the first time.

The opening score of the second half went to Aherne and Dublin as they opened up a 0-05 to 0-03 advantage but Cork had sprung Rhona Ní Bhuachalla from the bench at half-time. 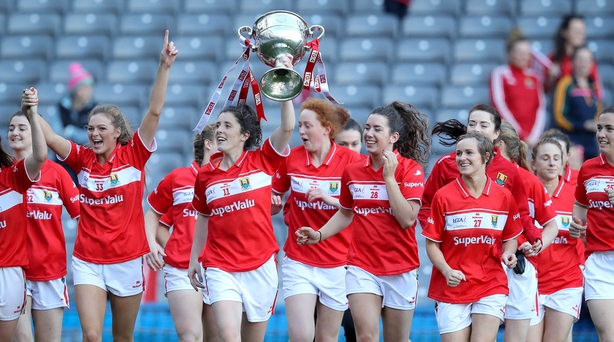 Two years ago, Ní Bhuachalla scored a crucial goal as Cork came from ten points down to catch Dublin and she was at it again today.

Captain Ciara O’Sullivan created the chance with a driving run and Ní Bhuachalla was on hand to find the net with a low finish.

But then Dublin entered the Cork ‘death zone’ as the Rebelettes turned up the heat and came with a crucial run of scores.

Referee: B Rice (Down)