Mayo’s Lee Keegan won his personal battle with Diarmuid Connolly by putting the Dublin forward off his game, according to Karol Mannion.

The sides will meet again on 1 October after Sunday's 2-09 to 0-15 All-Ireland final draw at Croke Park.

The in-form St Vincent’s clubman was held to one point, albeit a vital late score that put the hosts three points up, on a day where Dublin’s forwards failed to spark.

Keegan and Connolly have previous, most memorably in last year’s semi-final draw when the Dubliner was sent off, a sanction that was overturned on appeal.

The duo clashed again with 10 minutes left and both men were yellow-carded for a sloppy jersey-pulling exchange off the ball.

“I though it just got to Connolly a little bit yesterday, that kind of treatment he got from Keegan,” ex-Roscommon player Mannion told RTÉ Sport’s GAA podcast Jones’ Road.

“I think Connolly has reacted better previously to that kind of focus and abuse from defenders. I just think yesterday might have got to him a bit more.

“But, in fairness, he got that chance, and in the last five minutes he was looking for the ball a lot.

“Generally, throughout the game, I think Keegan just got to him a bit mentally.

“I think it annoys him so much because he feels disrespected. He has played such a high level for so long now that he feels he deserves a bit more respect than he’s getting from defenders. I think that gets to him.

“He also possible twinged his groin in the first half when he went to tackle and he slipped. That might have put him off a bit.” 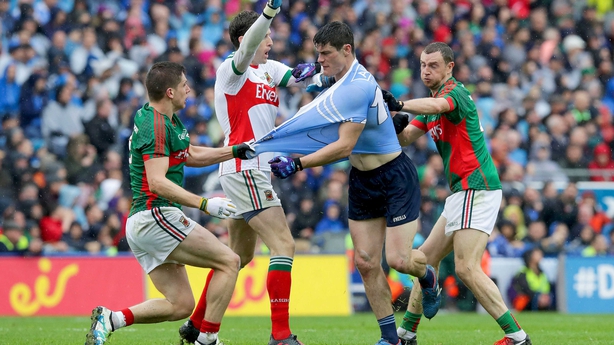 Former Dublin player Collie Moran agreed that teams are aware that Connolly, who has been held to only three points on the last four occasions he has been marked by Keegan, can be pushed into a reaction.

“I think he gets frustrated,” he said.

“He has been sent off in the past and he does pick up yellow cards for reacting to this kind of stuff.

“He is a top-class ball player, and maybe he’s looking to the seven officials there and he’s getting pulled and dragged off the ball...and he doesn't see umpires or linesmen putting their hand up.”