Champions Dublin and Mayo will meet again to contest the 2016 All-Ireland SFC title after finishing level on 2-9 to 0-15 in a riveting decider at Croke Park.

A heroic effort by both sides in challenging conditions produced a breath-taking contest epitomised by almost super-human effort as these great rivals slugged it out right to the end.

Two bizarre own-goals by Kevin McLoughlin and Colm Boyle handed the advantage to Dublin, but Cillian O’Connor held his nerve to shoot a brilliant equaliser in the seventh minute of stoppage time to save the day for the westerners.

The Dubs have another chance to make it two-in-a-row, but Mayo will return with a renewed confidence that they can end the famine and bring home Sam for the first time since 1951.

It appeared to be gone for Mayo when the holders led by three with 68 minutes on the clock, but they displayed remarkable courage to drag themselves back into it.

In front of a crowd of 82,257, Mayo flew out of the traps, displaying pace, dash and intensity as they ran at the Dubs.

Tom Parsons and Cillian O’Connor knocked over points, and Stephen Cluxton kept out Aidan O’Shea’s fisted effort in a nervous opening for the All-Ireland champions. 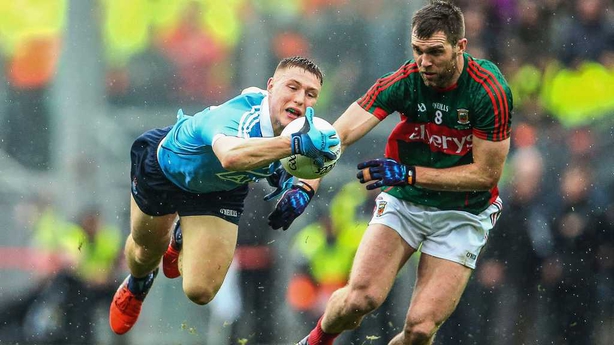 Jonny Cooper had to be alert also in blocking a Patrick Durcan effort, but Dublin got through that early storm to pose a threat themselves.

The first goal arrived in the ninth minute, David Clarke saving brilliantly from Brian Fenton, only for the ball to hop off the unfortunate Kevin McLoughlin and into the net.

O’Connor converted his second free, but remarkably, the Connacht men conceded a second own-goal in the 22nd minute.

Dean Rock, who was having an off-day with his place-kicking, failed to hold Diarmuid Connolly’s delivery, but spilled the ball into the path of Colm Boyle, and another deflection past goalkeeper Clarke.

Bizarrely, no Dublin player had managed to score inside the opening half-hour, but they led by 2-0 to 0-3.

Clarke was called into action again to pull off another brilliant save, this time from Kevin McManamon, as the Sam Maguire Cup holders continued to press for a score of their own.

Rock finally got off the mark with a 13 metre free, and substitute Paddy Andrews, in for the black-carded James McCarthy, fired over two splendid points.

Dublin’s tackling techniques were exemplary, forcing a series of dispossessions, while the tenacity of Mayo’s challenges forced several turnovers as a compelling tie stepped up in intensity. 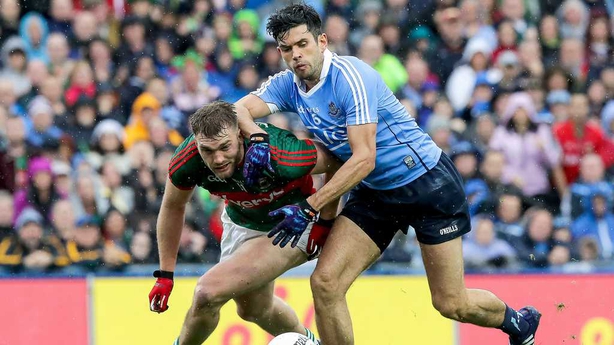 Dublin turned around with a 2-4 to 0-5 lead, but a Mayo whirlwind produced five points in the opening ten minutes of the second half, O’Connor bringing them level.

However, much of their high quality work was undone by sloppy distribution, and Jim Gavin’s men profited to go two clear through Rock.

The experienced Alan Dillon came off the bench for his fifth All-Ireland final appearance and shot the sides level for the third time, but once again, Dublin rode out the storm with some heroic defending from Jonny Cooper, Philly McMahon and John Small.

When Connolly exploited a poor kick-out to float over a spectacular score in the 68th minute, the Dubs were three to the good and ready to tighten a sky blue grip on Sam, but Mayo’s passion never waned.

They battled for possession like men possessed, and carved out the opportunities that were to keep the dream alive.

O’Connor’s free was followed by a Donie Vaughan special, and in the seventh minute of time added on by referee Conor Lane, Aidan O’Shea wrestled and battled for the possession that gave O’Connor the chance to arrow over a glorious equaliser from 40 metres.