Ann Downey was the centre of attention but it was a team effort that landed Kilkenny’s first Liberty Insurance All-Ireland Senior Camogie title since 1994.

Downey was captain 22 years ago and having played in Kilkenny’s 12 successes at this level, accumulated in a 20-year period from 1974, remains an ever-present in the Noresiders’ winning history, as manager of the new champions.

There had been many devastating heartbreaks since legendary figure climbed the steps of the Hogan Stand to receive the O’Duffy Cup, as Kilkenny had fallen at the final hurdle on six occasions.

She was boss when a team comprised largely of teenagers lost to Cork in 2009 and many of those were still there when she returned to the fold to finish the job at the beginning of this year.

They had fallen short in the 2013 and 2014 deciders in the interim, but with Conor Phelan and Paddy Mullally in situ as well, the brains trust behind WIT’s Ashbourne Cup success were ready to apply their winning formula.

They appeared to have struck the right balance in terms of positional switches, while the likes of WIT player Julie Ann Malone was introduced to the squad for the first time.

With four points, the Mullinavat attacker repaid that faith and ended this game as Liberty Insurance Player of the Match.

Kilkenny played the wings as much as possible, although Gemma O’Connor still got in plenty of possession.

Meanwhile, Denise Gaule had a free role that saw her having a very influential role.

Crucially, Cork could never get their overlapping game going, with the likes of Katrina Mackey, Briege Corkery and Amy O’Connor less prominent than normal. 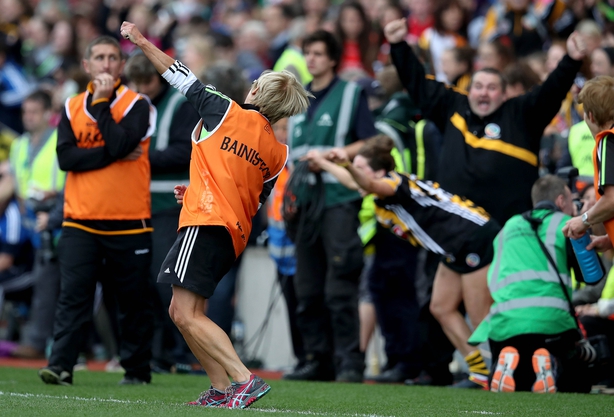 Added to all that were the lessons learned from previous disappointments, and the ravenous hunger to get over the line.

Kilkenny looked composed throughout and with the defence on top, Gaule unerring from placed balls and Malone on fire, they always held the upper hand.

A 42nd-minute goal from Shelly Farrell – one of three sisters lining out for Kilkenny – gave Cork a mountain to climb and they never looked like reeling in the deficit.

They weren’t helped as Gemma O’Connor was sent off in the 53rd minute having been shown a second yellow card but typical of a team that has won the last two titles, they kept trying right to the end. 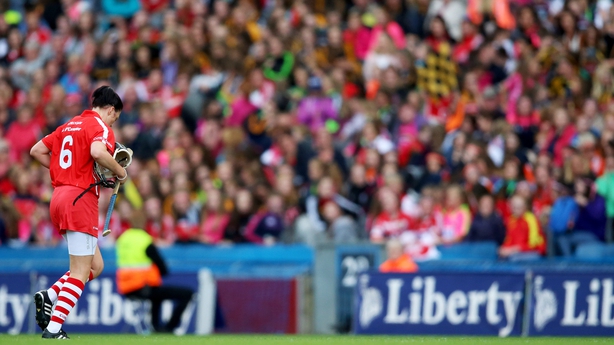 Emma Kavanagh had to make a very smart save from Eimear O’Sullivan on the hour and Orla Cotter drove a powerful shot beyond her from a free in the third minute of injury time but Kilkenny were able to see it out comfortably to complete a famous double, having bagged the Intermediate crown earlier.

They sealed another double too, as they harnessed the National League title in May, so there can be no argument about their status as the nation’s premier outfit this season.

As expected, team lists were of statistical interest only, with both outfits rotating regularly in a bid to create some element of space.

Kilkenny were more successful in this regard and Miriam Walsh wasted a goal chance after just 20 seconds when failing to gather 20m out from the Cork posts.

Meighean Farrell and Gaule (free) got the scoreboard going, but Cotter, who was one of Cork’s best performers throughout responded with a free.

Malone hit a super score as she dropped to her knees but Cotter launched a mighty effort from 50m to put one between them once more.

Alarm bells must have been ringing as the normally solid Cork full-back line allowed a long ball to clear them. Aoife Murray rushed out to meet Michelle Quilty, doing enough to put off the Kilkenny skipper, whose first time shot rolled inches wide.

Cork made the most of the let-off, enjoying perhaps their best period of the game, as Mackey fired over a spectacular point to bring the sides level and then O’Sullivan finished well from wide on the right to give them the lead for the only time in the game.

This was where the Black and Ambers were different to previous years, remaining calm and displaying real mental resolve to hit the next four points - Gaule with three frees and Malone the other, after showing good strength and then composure.

Ann Dalton saves a penalty from Aoife Murray to keep Kilkenny in front in the Camogie final. #rtegaa https://t.co/2BmkzWaqVP

Ashling Thompson ended the run with a 22nd-minute point before Cork were awarded a penalty, when Davin Tobin dragged down Hannah Looney.

Aoife Murray came forward to take the penalty and her rasping shot was destined for the top corner before Anne Dalton deflected it over.

That was probably a crucial moment four minutes from the break and Gaule slotted a free at the other end to make it 0-08 to 0-06 at half time.

Gaule and Malone were on the mark early in the second half as Kilkenny went three clear before Farrell took a pass from Katie Power and drove a ferocious shot high to the far corner of the Cork net.

There were still 18 minutes remaining but in a game with so little space, it was always going to be tough for the Rebels to get back, particularly as Power and Malone added points to open a nine-point gap.

Mackey and Libby Coppinger – introduced after playing the first 40 minutes of the Intermediate final – did their bit as Paudie Murray’s charges dug deep but there would be no way back.