Joint captains Teresa Meaney and Marian Doyle were presented with the Kay Mills Cup by Camogie Assoication President Catherine Neary, just 12 months after annexing the Junior A title, and having performed so well in Division 2 of the National League this year, will be sure to ruffle plenty of feathers in the Intermediate grade next year.

The game was delicately poised at half time, with favourites Armagh leading by 1-05 to 1-04 after Quirke’s 13th-minute goal had been answered two minutes later by a similar score from Colette McSorley.

Quirke applied the finishing touch for another goal almost immediately after the resumption but it was Sawyer that really took the game by the scruff of the neck as the spaces began to open up. 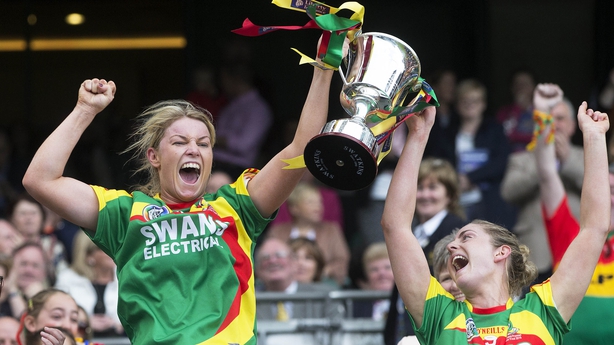 Firsty, the Naomh Brid teenager, who entered the fray just before the break, slotted a point after beating three Armagh defenders and despite being fouled twice – referee Andrew Larkin awarding a judicious advantage.

There was an element of luck to her 45th-minute goal as she raced away from Hannah McGeown and shot for point.

Armagh goalie Bronagh Mone attempted to kill the sliotar on her hurley but to her horror, dropped it behind the line and Carlow had opened up a five-point lead.

To their credit, Armagh hit back with what – without any patronising – is surely the best goal seen at GAA headquarters this year, and one of the best for many seasons, in any code.

A delivery from wide in the right appeared to be drifting wide but while facing the endline, Ciara Donnelly craned her neck behind her, kept her eye on the ball and as it cleared her left shoulder, doubled off her left side to direct it sensationally into the far corner of the net. 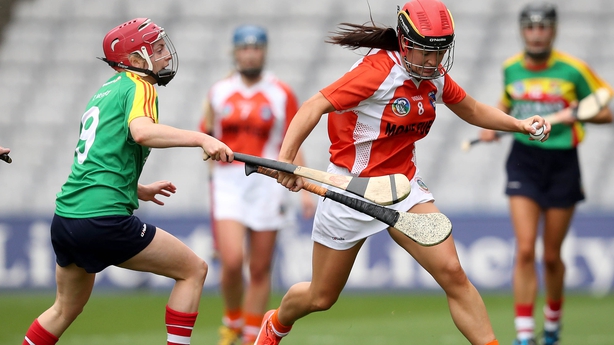 It was a two-point game once more but Carlow showed their mettle by keeping Armagh scoreless form the remaining 18 minutes (including three of injury time).

They had three points immediately from Sawyer, Quirke and Eleanor Treacy to negate Donnelly’s superlative effort.

In the 56th minute Quirke won a dirty ball, gathered possession, swivelled and launched a rocket to the roof of the Armagh net to put the issue beyond doubt.