Brian Cody conceded that his side were "comprehensively" outplayed by Tipperary as the Premier County outgunned Kilkenny with a tremendous second-half performance to regain the Liam MacCarthy Cup at Croke Park.

It's Tipp's first All-Ireland final triumph since 2010, and 27th overall, and was fashioned with a superb display after the break that saw them outscore Cody's side by 2-15 to 2-08.

Tipp always felt they'd require goals to beat the stubborn Cats and they got them from John 'Bubbles' O'Dwyer and John McGrath, while Seamus Callanan top-scored with 13 points.

"There's no arguments about today, the better team won the match," said Cody.

"It was comprehensive. We went in at half-time two points down, well in the game, and got a good start to the second half and got the goal.

"But they didn't blink, they came back at us and they got some terrific scores. We were outplayed throughout the second half and there's no argument that the better team won."

It's sweet success at the first attempt for Michael Ryan, who took over as Tipp boss this season, though the win ends a bitter cycle of defeats to the Cats - Tipp had lost seven of their previous nine Championship encounters.

O'Dwyer's strike was one of many crucial moments in the match, propelling Tipp into a four-point lead, and the corner-forward's haul of 1-05 ensured he more than justified his inclusion after failing to regain his place following a Munster semi-final red card.

“Since the Galway game he’s been in outstanding form, he was there on merit and there’s no freebies in our world,” said Tipp boss Ryan.

“We pick on merit and timing is everything. He’s in great form and as you saw out there today he’s a bit irresistible.”

Bookmakers had struggled to separate the two teams heading into the final and historically there’d been precious little to separate the Cats and the Premier County when they met in hurling’s marquee match.

They had leaders all over the field with John McGrath tallying 1-03 and big displays from the likes of Noel McGrath, Patrick 'Bonner' Maher and Padraic Maher. 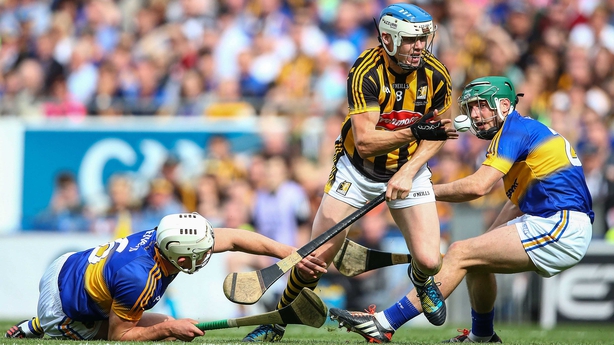 Kilkenny saw off Dublin and Galway previously with strong second-half performances but were blown away this time by the sheer ferocity and quality of the Munster champions after the break,

Ryan hailed the intensity of his charges, adding: “I’m not aware of the second half stats, but it felt like we might have tipped the scales in our direction (in terms of work-rate).

"It felt like a phenomenal second half and the intensity levels were really high. Our guys showed great skill and great composure throughout.

“There’s nothing revolutionary about forwards working hard - every team in the country sets out to do it, but we seemed to really get it right.”

Eoin Murphy was a reported injury concern for Kilkenny beforehand though lined out as per the official team sheet with both teams setting up in orthodox formations.

That lent for some intriguing head to head battles with Kilkenny full-back Joey Holden picking up Tipp danger man Callanan.

Back-to-back All Star Callanan easily got the better of that duel and scored five first-half points as Tipp reached the interval with a slender 0-14 to 0-12 advantage.

The Tipp forwards rotated positions throughout the half though O'Dwyer was mainly stationed at corner-forward and scored four points, two of those off his marker Paul Murphy whom he tortured all afternoon.

The sides were level 10 times throughout a tight and intense first half though, in truth, the game was waiting on a vital spark to explode into life.

That moment arrived seven minutes after the restart when Kevin Kelly hit the opening goal for Kilkenny.

Walter Walsh fed Liam Blanchfield on the left and his ground stroke across the goal mouth found Kelly who had time to control and poke to the net from close range.

Kilkenny now led 1-14 to 0-15 but instead of kicking on in typical fashion with a third-quarter flourish, they conceded 1-04 without reply which put Tipp firmly back in control.

O'Dwyer's goal was a corker as he got the better of Murphy again on the left and released a low rocket to the bottom right corner of Kilkenny's net.

Callanan and Padraic Maher weighed in with points too and Tipp surged 1-19 to 1-14 clear. Their second goal came nine minutes from time when Noel McGrath fed brother John who blasted to the roof of Kilkenny's net.

Hogan slammed a Kilkenny goal in response with a clever ground stroke but Tipp finished strong and with the stamp of champions as O'Dwyer, Callanan and Patrick Maher all pointed, celebrating each score with fist pumps. Their time had come.