Waterford are through to a first Bord Gáis Energy All-Ireland U21 hurling final since 1992 after whipping Antrim by 29 points in Thurles this afternoon.

Patrick Curran led the way with 2-07 as the Déise gained some measure of consolation for last Saturday's All-Ireland SHC semi-final replay defeat to Kilkenny at the same venue.

At half-time, Waterford were 13 points clear (3-10 to 0-06) and they didn't let up in the second half as they beat the handicap of 25 points on offer from the bookies.

Hurler of the Year contender Austin Gleeson shone from centre back before going off late on while fellow seniors Conor Gleeson, Tom Devine, Patrick Curran and the Bennett brothers, Shane and Stephen, were also starters.

Shane Bennett went off injured early on but, in truth, he wasn’t needed as Waterford didn’t need to get out of second gear to see off the Saffrons, with Curran on song.

The only real pre-match debate surrounding this game was how much Waterford would win by and they went about their business early, looking to get this one done and dusted as quickly as possible.

The Déise were 2-05 to 0-00 clear before Antrim registered their opening score – Saul McCaughan converting a 19th minute free for the Glensmen.

Tom Devine looked to have taken too many steps in the 11th minute before crashing home Waterford’s goal but it was a spectacular effort nonetheless, high past Ryan Elliott in the Antrim goal. 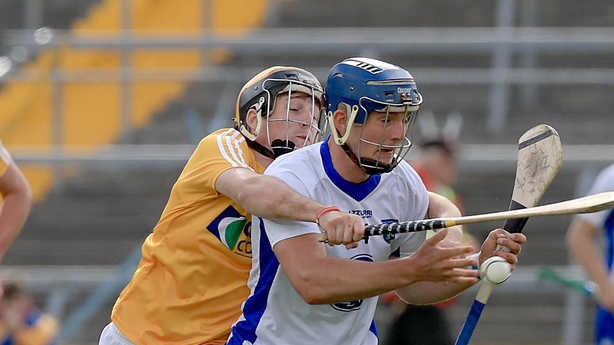 Waterford’s second green flag arrived in the 15th minute and this time it an own goal from Antrim corner back Eoin McManus, who flicked the ball into his own net after DJ Foran’s effort was half-blocked.

And Waterford had goal number three on the stroke of half-time when Bennett’s effort was saved by Elliott but spooned into the air and Patrick Curran pounced to bat home from close range.

Antrim played with a strong breeze blowing towards the Town End in the opening half but they managed just two points from play before the interval – Domhnail Nugent and McCaughan on the mark.

Waterford fell asleep early in the second half as McCaughan stole in for an Antrim goal but the winners responded with further goals from Stephen Bennett and Curran, who completed his brace. 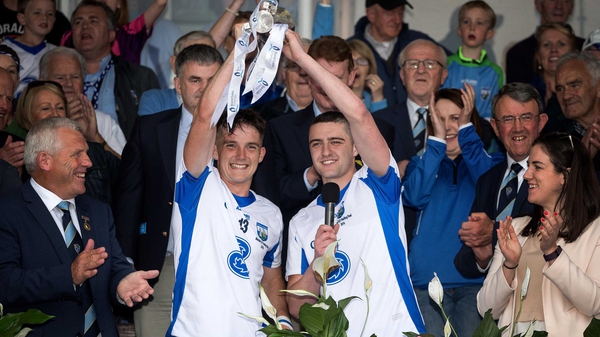