Jim Gavin insisted questions about Dublin's discipline in Saturday's All-Ireland quarter-final victory over Donegal should be directed at the men in black rather than his side.

Dublin were comfortable 1-15 to 1-10 winners against their Ulster rivals at Croke Park, but ended the game with 12 players after both Diarmuid Connolly and Eoghan O'Gara were sent off and Brian Fenton was black-carded by referee Ciaran Brannagan.

O'Gara's dismissal was a straight red that was the result of a clash with Neil McGee, who saw yellow over the incident, and Gavin indicated that Dublin were likely to appeal the automatic suspension that would rule O'Gara out of a semi-final against old foes Kerry.

"It was predictable enough stuff that was going on in the first half, I think we know now that a lot of our players are going to be targeted," Gavin told RTÉ Sport.

"If the officials are not going to do anything about it you probably need to ask them the questions of what's going on.

"But the way we want to play the game, trying to play the right way, for us to finish up with 13 men is a bit strange.

"But our boys don't complain and there was never any sense of doubt in what they wanted to achieve. They are a very purposeful group and they just kept going through the phases and closed the game out very comfortably."

"The way we want to play the game, trying to play the right way, for us to finish up with 13 men is a bit strange."

Dublin face the Kingdom back at GAA HQ in three weeks' time but Gavin was instead happy to focus on a "controlled" display from his side against Donegal.

"We haven't had the opportunity to lift our heads up beyond Donegal. We'll reflect over the coming days and move on to Kerry," he said.

"They (Donegal) have an excellent defensive system, to get to six Ulster finals in a row and push on to six quarter-finals in a row speaks volumes for what they have and their place in Gaelic football history.

"They are outstanding players and they play that style of counter-attacking football very well. They want to compress space, suck you in and counter attack.

"But I thought we controlled it very well. We had good structure, both up front and behind and that served us well.

"Our resilience and the character the boys have, I just thought it was an outstanding effort from everybody." 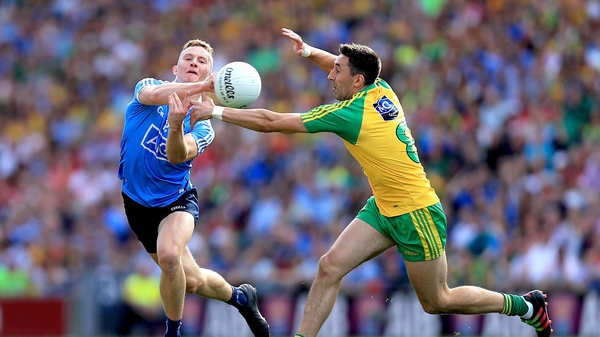 Ciarán Kilkenny savours win on a testing day at Croker