Former Sligo footballer Eamonn O’Hara praised the character of Mayo after an enthralling All-Ireland quarter-final victory over Tyrone, but says Stephen Rochford’s side were close to throwing it away.

The Connacht side qualified for their sixth successive All-Ireland SFC semi-final with a 0-13 to 0-12 win over the Red Hand at Croke Park.

Four Cillian O’Connor points gave Mayo and edge, but Tyrone, with Mattie Donnelly hitting three, were level at 0-7 each at the break.

Tyrone skipper Seán Cavanagh was sent off on a second booking when the sides were locked on 0-11 each.

Late scores from O’Connor (0-7) and Lee Keegan clinched a last four meeting with Tipperary for the Connacht men.

The 2002 All Star argued that while the contest was “gripping”, the standard of play left a lot to be desired.

That will matter little to the victors who sealed their place in the last four and O'Hara paid tribute to the attitude of the victors.

“The quality of football was poor,” he said.

“Mayo in the last five minutes didn’t know how to win the game, but their celebrations afterwards showed me that there was an unbelievable element of doubt in this group.

“They have slowly but surely come back. There was  a lot of pressure on this team but they have shown huge character. 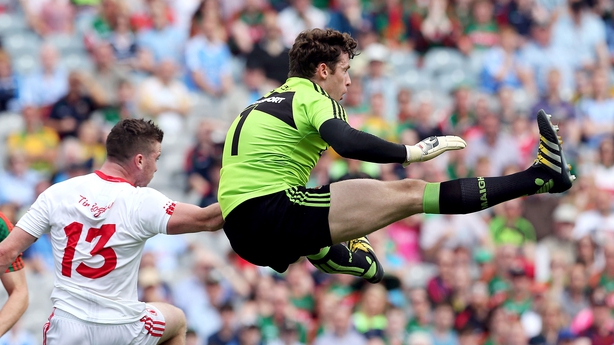 “All the talk was about Tyrone and that that this was their team.

“Credit to Mayo, but they nearly gave it away.”

Aidan O’Shea’s long range effort got Mayo going, with an equally impressive Niall Sludden point the only other score of an opening 12 minutes dominated by defences, with both sides operating with double sweepers.

Colm Cavanagh’s value as a defensive gem was underlined by a perfectly timed tackle on O’Shea.

Cillian O’Connor’s 43-metre free nudged the westerners into a 0-3 to 0-1 lead, but the Red Hands were level by the 18th minute, two Mattie Donnelly scores in the space of 70 seconds lifting their spirits.

O’Connor danced through for a delightful score, but Peter Harte had the sides level for the fourth time as he stroked over a 13-metre free.

The Ulster champions hit the front for the first time with another placed ball effort from Harte, who sent Donnelly through for a brilliant score, curled over at Hill 16 from beneath the Hogan Stand. 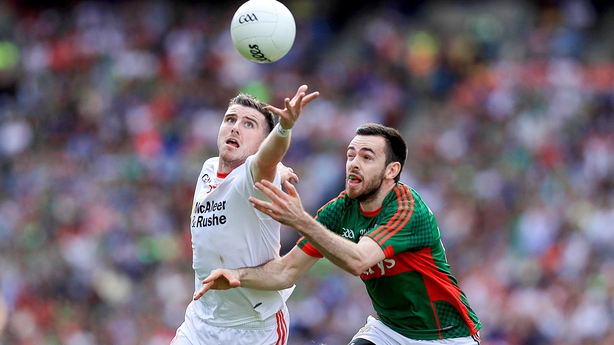 Lee Keegan held Sean Cavanagh in check in an impressive man-marking job, and Seamus O’Shea and Colm Boyle provided the impetus for another Mayo flourish, with the latter hitting the target from distance to tie it up at 0-7 each at the break.

O’Connor was on target again as the Connacht side opened up a two points gap, their reward for a more positive approach, as sweeper Kevin McLoughlin took up a more offensive role.

Donnelly was the axis on which Tyrone turned the game once again back in their favour, and his incisive pass should have led to the game’s opening goal, but Connor McAliskey’s shot was too easily dealt with by David Clarke.

Two Connor McAliskey frees had Tyrone back on level terms again, and they regained the lead in the 53rd minute when Harte appeared on Donnelly’s shoulder to nail his fourth score.

The sides had gone level for an eighth time when Tyrone lost skipper Sean Cavanagh to a second yellow card on 58 minutes, and O’Connor promptly sent his side back in front from the resultant free.

Mayo almost paid the price for the risky strategy of trying to run down the clock, with Niall Morgan (free) and Daren McCurry both missing the target as possession was turned over.

In the end, Lee Keegan’s 65th minute point proved to be the winner as they moved through to a semi-final meeting with Tipperary.