Paddy McBrearty hailed the experienced voices in the Donegal panel as they bounced back from their Ulster final defeat by Tyrone to book an All-Ireland quarter-final date against Dublin.

Donegal fought back from an early five-point deficit to run out 0-21 to 1-15 winners over Cork at Croke Park, with McBrearty's 11-point haul, which included seven superb points from play, the key to overhauling the Rebels.

And the inside forward praised the character shown by the squad to rebound from their provincial agony, particularly the impact of senior members of the panel in the fortnight since the Ulster final.

"I'm just happy to be into the next round to be honest, back into a quarter-final," McBrearty told RTÉ Sport.

"It was a long 13 or 14 days since that Ulster final defeat to Tyrone. We'd asked ourselves some questions and we're just happy to get the win today and get that momentum back.

"We went back to training after the Ulster final and we were either going to let it slip or push on and some of the the older boys in the squad really pushed us on and set ourselves up for today."

Cork flew out of the blocks with a quick 1-05, and although Donegal remained calm and pegged the Leesiders back to trail by just a point at the interval, McBrearty indicated they would take the lessons of their slow start forward to next weekend's clash with the All-Ireland champions.

"I wouldn't say (Cork) surprised us, we knew what we were facing today," McBrearty said.

"Look through their team, there's some quality players throughout it, so we weren't one bit surprised with the talent they had.

"We were probably disappointed with some elements of our own play, that we didn't perform 100 per cent to.

"But I think the character was great today and we got back level and pushed on from there." 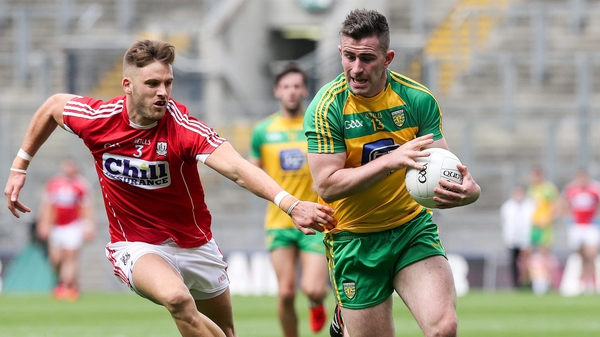