Waterford are back in another All-Ireland SHC semi-final after Pauric Mahony landed eight points en route to a comfortable 0-21 to 0-11 victory over Wexford at Semple Stadium this afternoon.

Waterford registered a massive tally of 17 wides, with seven of those coming from the hurl of Austin Gleeson, but still managed to easily fend off a spirited second-half revival from Liam Dunne’s Wexford.

Waterford led by 0-15 to 0-05 in the second half before Wexford rallied to within five with a run of five unanswered scores.

But Waterford hit back with six on the trot themselves to make this one safe and secure a berth in the last four.

There was a huge setback for Waterford in the first half, however, as Darragh Fives limped off with what appeared to be a recurrence of a quad injury.

Wexford also lost Eoin Moore in the second period as the Oulart-the-Ballagh defender was stretchered off in agony.

By half-time, Waterford had registered as many wides as points.

They led by 0-12 to 0-05 at the end of a disappointing half, pockmarked by poor shooting and the occasional long-range special.

With both sides operating sweeper systems, goal chances were at a premium and both sides were content to have a go from distance. 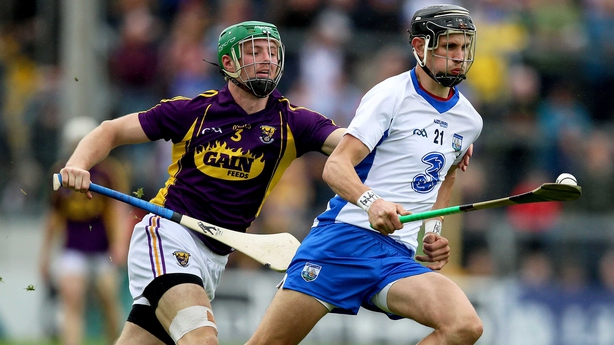 Waterford raced into a 0-06 to 0-01 lead by the tenth minute as Wexford found scores hard to come by.

McDonald, a subdued figure, went for goal from a 20-metre free that was blocked in the 13th minute and he was off-target from the resultant 65.

McDonald did nail an 18th-minute free to end a 12-minute barren spell on the scoreboard for Wexford, but Waterford seemed to be cruising and operating well within themselves as they went on to lead by seven points at the break.

That massive wides tally in the first half will have been a concern to boss McGrath, however, but with the breeze at their backs in the opening half, and Wexford playing with a massed defence, the temptation was always there to have a pop from outside the 45-metre line.