Conor Sweeney hailed Tipperary's "bottle" after their memorable All-Ireland SFC qualifier victory against Derry on Saturday, and insisted he knew his team-mates would not falter in their quarter-final quest.

The Ballyporeen corner-forward fired over two brilliant frees in the closing stages to swing a pulsating encounter the Premier's way, after Eoghan Brown's goal had hauled the Oak Leafers back into it.

Liam Kearns' men can now look forward to a showdown with Galway next Sunday, and Sweeney basked in the glory of a landmark win.

"We've had a good few knocks through the year, losing players and that.

"It just goes to show the bottle and the lads that we have. We pulled it out of the bag again, which is great to see.

"I'm just delighted to get to t the last eight for the first time ever."

Tipp will take part in a mouthwatering Croke Park double-header next Sunday.

Clare, who sent Roscommon packing with a highly impressive win at Pearse Stadium, will take on Kerry in the day's other quarter-final. 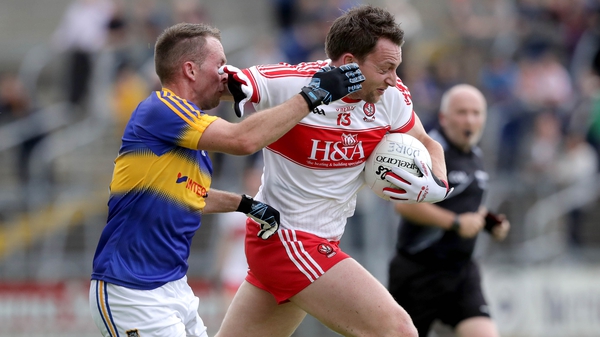 As it happened: Saturday's championship action