Meath manager Mick O'Dowd spoke of his pride at being given the opportunity to lead the Royals as he stood down from the role following a qualifier defeat by Derry.

O'Dowd's side threw away a strong half-time lead, allowing the Oak Leafers to overhaul a seven-point advantage, with a late goal for Niall Loughlin the decisive moment in a 1-14 to 1-11 scoreline.

The defeat ended Meath's interest in this summer's Championship and Skryne clubman O'Dowd revealed his decision to quit after four seasons in charge and wished his successor the best in progressing further with a young squad.

"This is my last game with the team, I'm standing aside," O'Dowd told RTÉ Sport after the game at Owenbeg.

"I've been very proud and honoured to manage the county, and have probably done so at a period of serious transition.

"I just hope that the work and the foundations we have put in... I think the squad is here for the next five or seven years.

"Obviously, new lads need to come in as well and I wish the next management team the best of luck in working with those players. I hope they get the best out of them."

Derry manager Damian Barton was delighted with the resolve shown by his side after being well off the pace in the opening stanza.

"We didn't turn up for the first part of the first half and the goal was a sucker blow to us," Barton said.

"Meath were just a yard ahead of us, they were sharper, mentally and physically, and but for the goalie and a couple of heroic blocks we could have been another couple of goals down.

"We had nothing to lose in the second half and we pushed up and changed a wee bit of our system, and fair play to the boys.

"The start we got to the second half, the three or four points, was a big thing, and it was just a case of could we keep it going.

"But we wouldn't have won the game without the goal and, in truth, the bench won the game. They had a massive contribution." 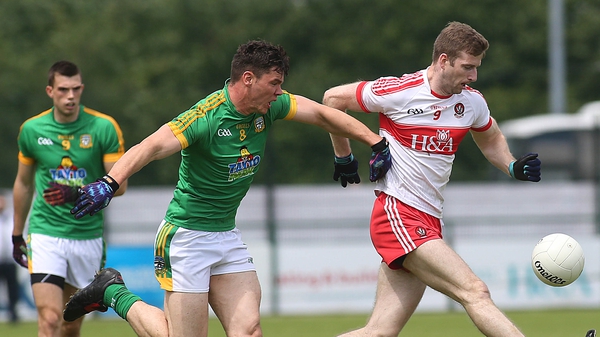