Thomas Flynn scored the crucial goal as Galway created the shock of the summer to send five-in-a-row champions Mayo crashing out of the Connacht Senior Football Championship title race.

Mayo led by 0-08 to 0-06 at the interval and pulled four points clear before Flynn struck 15 minutes from the end.

Mayo, bidding for an historic sixth title in a row, just were not able to recover as the Tribesmen held on in style to turn over their biggest rivals.

Mayo were forced to dig deep to deal with the fired-up challenge from Tribesmen but they finished the opening half strongly to lead by 0-08 to 0-06 at the break.

Eamon Brannigan, one of five debutants in the side, found the target to settle the Tribesmen.

Two points from Gary Sice put Galway ahead before the crowd of 21,784 saw O’Connor and Shane Walsh exchange points.

Another debutant Johnny Heaney pointed from a goal chance but the champions responded strongly before the break with Colm Boyle and Tom Parsons pointing as Mayo finished the half with a flourish to lead by 0-08 to 0-06 at the interval.

O’Connor landed another free just after the restart to extend Mayo’s lead but Brannigan hit back with an excellent effort for the Tribesmen.

Further points from Evan Regan and O’Connor put Mayo four points in front to lead by 0-11 to 0-07 after 50 minutes. 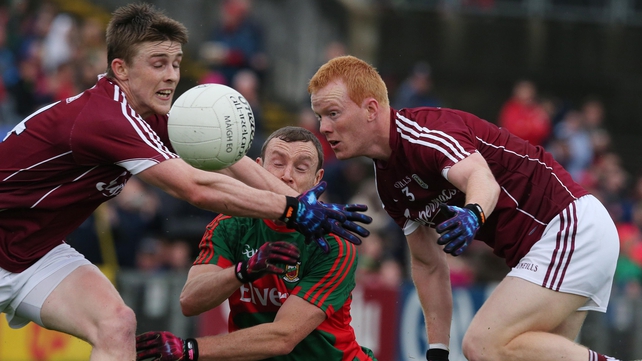 However, it was Galway who took over and Sice pulled back a point to give them hope.

Then came the turning point when Flynn intercepted a short kickout from goalkeeper Robbie Hennelly and soloed through before drilling a powerful low shot to the back of the net.

Galway followed up that score with points from Conroy and Danny Cummins raced through to score to open up a 1-10 to 0-11 lead with 13 minutes left.

Sice kept his composure to convert another free and then Conroy went forward to put four between them three minutes from the end.

O’Connor pulled back a free for Mayo in the closing stages but they never looked like getting through for the goal which would have forced a replay.