Westmeath survived a powerful Offaly comeback in the second-half to reach the Leinster SFC semi-final after an enthralling battle at Cusack Park ended in a 0-13 to 0-12 win for the home side.

Westmeath needed late points from Kieran Martin and the outstanding James Dolan to take the win and work their way into the last four where they will face Kildare in a fortnight.

Offaly’s Nigel Dunne kicked five points in the second-half before he was black carded in added-time, while Niall McNamee was unable to convert a long-range free in the 73rd minute to force a replay.

With a strong wind behind them Westmeath were good value for their 0-9 to 0-3 lead at half-time, but Tom Cribbin will feel that his side should have been even further clear before the Offaly revival grew legs in the third quarter. 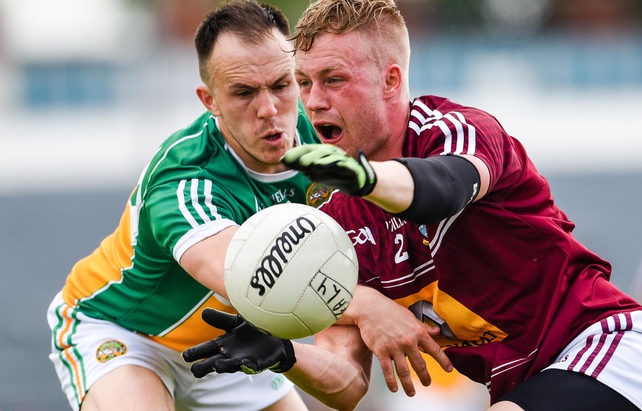 From the early exchanges it was clear that Cribbin had his pairings right in attack as John Heslin made the most of his aerial dominance over Sean Pender to help his side to an early lead.

But it was Denis Corroon that got Westmeath up and running with a fine score from the right wing, before Heslin drew a foul from Pender and made it 0-2 to 0-0 for the home side.

With John Connellan looking particularity dangerous at centre-forward Westmeath continued to carve out chances, and the Athlone clubman picked out Heslin twice in three minutes for good points from play which gave the home side a four-point cushion.

After that fourth point Offaly finally relieved Pender of his marking duties on Helsin and to his credit Eoin Rigney fared a lot better on the powerful attacker.

At the opposite end a foul on Bernard Allen allowed Nigel Dunne to tap over his first free in the 17th minute, and when Allen pointed on the turn three minutes later and Graham Guilfoyle followed suit from distance Offaly were back to within a point of their hosts in the 22nd minute.

But other than that five-minute flurry, there was a lot of sloppy play from Offaly before the break as their handling let them down and mistakes at the back – like Alan Mulhall’s dropped catch for Paul Sharry’s 45 in the 32nd minute – saw them trail heavily at the interval.

In the closing 13 minutes of the half Westmeath kicked an unanswered five points – two each for Sharry and Connellan – while Heslin’s fourth point of the half gave them that 0-9 to 0-3 lead at the break. 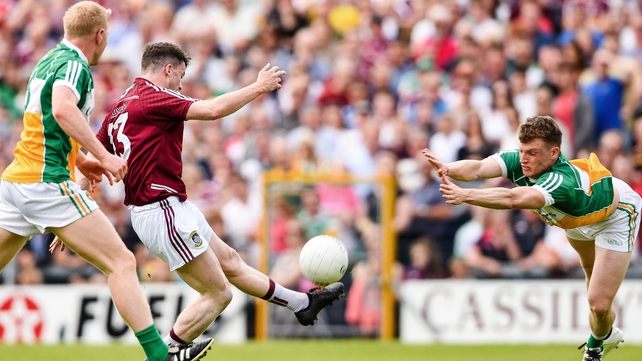 An early free from Dunne cut the lead to five points, but a minute later a brilliant block by James Dolan denied Guilfoyle a goal after a driving run from deep. Moments later Guilfoyle was shown a black card when he tripped Kevin Maguire, but still Offaly kicked five of the next six points to cut Westmeath’s lead to 0-10 to 0-9.

Offaly’s tails were up at that point, but Kieran Martin managed to find Heslin in space and the St Loman’s man landed his only point of the half to restore their two-point cushion with 15 minutes remaining.

Dunne was in great form from placed balls and responded with a well struck free with 12 minutes remaining, but each time the Faithful county pulled close, Westmeath had an answer.

Martin made it 0-12 to 0-10 with four minutes remaining, before Dunne scored from open play, but James Dolan popped up in added-time to kick the insurance score to seal Westmeath’s place in the semi-final.