Clare have made an immediate return to Division 1A and consigned Limerick to a seventh consecutive season of second tier hurling with a 1-19 to 0-18 victory in their promotion battle at Cusack Park.

The sending off of Barry Nash for a second yellow card three minutes from half-time had a big impact on the outcome as Clare easily held on to their four-point lead at the break to win easily.

John Conlon’s goal in the first minute had gotten Clare off to the dream start and they ran out easy winner as Conor McGrath hit five points from play and six Bobby Duggan frees secured the win.

Clare have yet to lose a game this year and now go on to meet Tipperary in Division 1A in the league quarter-finals in a fortnight’s time.

Just 35 second had elapsed when Clare struck the opening goal of the game and Conlon showed impressive strength to shake of the challenge of Richie McCarthy before he rattled the net from close range.

As Clare have often done under Davy Fitzgerald, a well worked sideline cut allowed Conor McGrath make it 1-1 to 0-0 after four minutes, and two minutes later that lead was stretched by an another point when David Reidy was found by Patrick Kelly for a puck-out and the Eire Og man split the posts.

Just before that score Nash was booked for a hit on Kelly as he emerged with the ball, a booking that would cost him later in the half.

Clare were well on top at that stage, and it took until seven minutes in for Limerick to register a point; Graeme Mulcahy was the scorer after he did well to lose marker Cian Dillon.

In an interesting tactical twist, Limerick manager TJ Ryan elected to push his six forward into their traditional positions in the first-half, which negated Clare’s usual extra man at the back.

As the half wore on, an extra Clare player dropped deeper, which created a match-up of six Limerick forwards against seven Clare defenders. Consequently, at the other end Limerick also had an extra man, a job that was rotated between Tom Condon and Richie McCarthy.

For the first ten minutes or so Limerick struggled to get good ball into those forwards though, but after Declan Hannon pointed a free to cut the lead to four, Paul Browne began to have a big influence around midfield and his two points from play were cancelled out by a couple of Bobby Duggan frees at the other end. 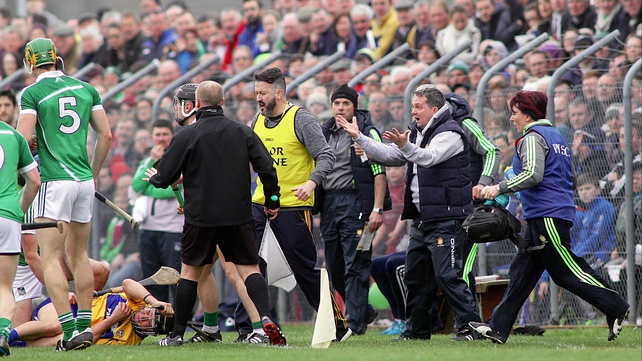 Kelly’s puck-outs were successful in launching several Clare attacks, and in the 22nd minute he picked out Colm Galvin in space and the Clonlara man landed a fine point to make it 1-6 to 0-4 for the home side.

Three Hannon frees cut Clare’s lead to two points, six minutes from the break, and after Browne hit his third point of the half soon after just a point separated the sides.

But Limerick’s challenge took a nosedive in the 32nd minute when Nash picked up his second yellow card for a high challenge on Galvin and when Duggan added two frees for Clare before the interval they held a commanding 1-10 to 0-9 lead at the break.

Clare were left waiting for Limerick to emerge for the second-half but when they did they were met with a blistering start to the half from the Banner men.

Cian Dillon started a run of three unanswered scores with a driving run and point off his stick, and Conor McGrath and Galvin followed suit moments later.

The sending off of Nash left Clare with two spare men at the back but an accurate pass from Diarmuid Byrnes picked out Hannon, who hit over a great sore for Limerick to make it 1-13 to 0-11.

Despite their numerical advantage, Clare were unable to shake off the Limerick challenge as poor wides from Duggan and Reidy threatened to let Limerick back into the game.

But Limerick were sloppy at the back and after Shane O’Donnell dispossessed Richie English for a Conlon point, and Duggan landed two frees, the lead was back out to six points again.

Substitute James Ryan hit over a good point from play but he limped off injured moments later for Limerick and when Conor McGrath hit a brilliant point from the right sideline on the hour mark Clare regained control.

It was left to substitute Cathal O’Connell to finish the job for Clare with a couple of late frees, as the Banner took a comfortable win despite a tally of 19 wides.

Clare now face Tipperary in the quarter-finals, while Limerick face Dublin, but don’t have the satisfaction of promotion to drive them. 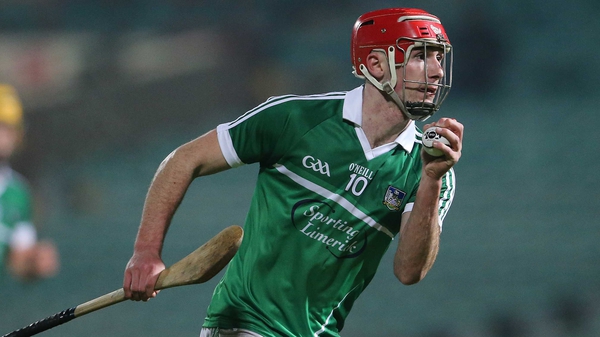