Dublin made almost certain of a Division 1 Allianz Football League semi-final place with a fifth straight win, beating Down by 1-15 to 1-07 at Pairc Esler.

Donal O’Hare hit an early Down goal, but Cormac Costello rifled home a goal as Dublin hit 1-7 without reply.

They led by 1-8 to 1-3 at half-time, and continued to dominate after the break, with Dean Rock, Paddy Andrews, Paul Flynn and Jonny Cooper all hitting points.

Down have lost all five of their games, and look destined for a quick return to Division 2.

Donal O’Hare hit an early Down goal, but Cormac Costello raised the green flag as Dublin hit 1-7 without reply.

In truth the home side was never able to muster a threat sufficient to trouble the defending League and All-Ireland champions.

The Dubs led by 1-8 to 1-3 at half-time, and continued to dominate after the break, with Dean Rock, Paddy Andrews, Paul Flynn and Jonny Cooper all hitting points. 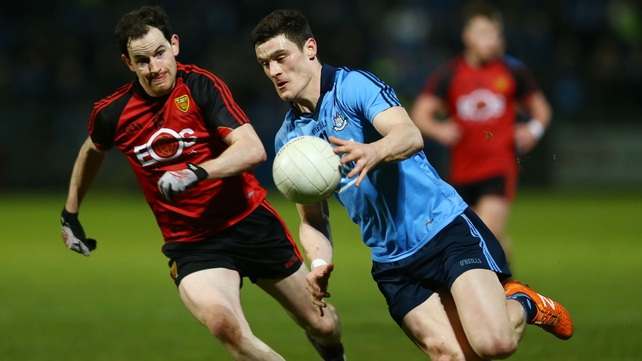 Down took the lead in sensational fashion in the fifth minute when O’Hare’s attempt for a point from distance fell short, but Stephen Cluxton failed to hold, fumbling the ball into his own net for the Mourne men’s first goal of the current campaign.

Down lost Kevin McKernan to a black card moments later, but stretched the lead through his replacement Joe Murphy.

Dean Rock had given the visitors an early lead, but it took them another 12 minutes to add to their tally through a Costello free.

Down ‘keeper Michael Cunningham was struggling to find men in red and black from his kick-outs and the Dubs capitalised with 1-2 in the space of two minutes.

Paul Flynn and Ciaran Kilkenny slotted over points, and in after 17 minutes Costello smashed home a goal after Kevin McManamon’s shot had been charged down.

Soon Jim Gavin’s men were playing the game on their own terms, getting men forward, spreading the ball wide and finding colleagues in space, thanks to their clever and fluid movement.

Pressing high up the pitch, they made it almost impossible for the home side to play their way out of their own half.

O’Hare finally ended a 26 minute scoreless spell with a converted free, but Costello’s 1-3 haul sent the Dubs in with a 1-8 to 1-3 interval lead.

Costello and Flynn tagged on points early in the second half as the Dubs eased further ahead, and they should have had a goal, but Cunningham saved well from McManamon, who turned the rebound over the bar.

Flynn departed on a black card, but only after landing a delightful score, and Down pulled back points through O’Hare, Murphy and substitute Paul Devlin.

Midway through the half, they had trimmed the deficit back to four points, but there was always the sense that Dublin had much more in reserve.

The Boys in Blue were still able to create goal chances, and Eric Lowndes, just on as a sub, pulled a shot wide when he should at least have tested the ‘keeper.

Rock drilled over a ’45, and the excellent Cooper pushed forward to claim a point before Paddy Andrews came off the bench to launch a brilliant score from wide on the left.

Down didn’t score in the final quarter, but they did twice come close to grabbing goals, Devlin smashing a shot against the crossbar, while Henry Brown was denied by a post. 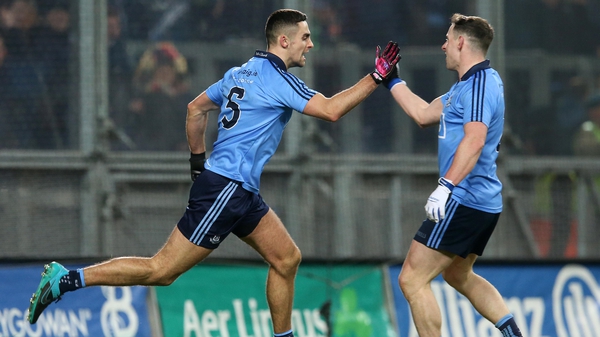