Roscommon look like they have secured their Allianz Football League Division 1 status after Ciaran Murtagh fired them to their third win of the campaign on a 1-12 to 0-06 scoreline at Pearse Park in Roscommon.

The game was played at the neutral venue because Dr Hyde Park was deemed unplayable earlier in the week, but the strange surroundings didn’t upset Kevin McStay and Fergal O’Donnell’s side who were rarely troubled by the Mourne men.

Murtagh hit the net with a penalty one minute from time after goalkeeper Michael Cunningham tripped Fintan Cregg – he was black carded for the foul – which wrapped up the win, but the points were well secured at that stage.

With no win to their name yet in their Division 1 campaign you would have expected Down to be hungry for the points and their early display indicated that they were in the right humour.

After Cian Connolly missed from close range for Roscommon in the first minute, it was Down that started the scoring as wing-back Darragh O’Hanlon and full-forward Connaire Harrison found the target for a 0-02 to 0-00 advantage by the seventh minute.

But with that cushion Eamonn Burns’ side retreated into their shell and Roscommon began to dominate.

Team captain Ciaran Murtagh got Roscommon up and running with an eighth minute free, and he added a second a minute later following a foul on Senan Kilbride. But Murtagh was also in form from open play too, and his points in the 14th and 16th minutes gave Roscommon a deserved 0-04 to 0-02 lead.

It was then the turn of Fintan Cregg to show his wares and he followed a well struck free with a brilliant point from outside the 45 metre line, which opened out a four point lead for the division newcomers. 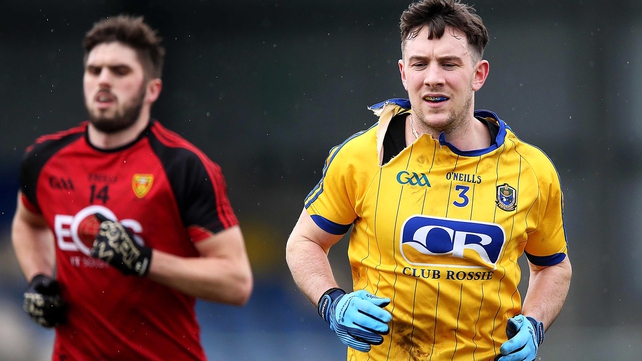 Down continued to sit back in defence and employed both Aidan Carr and Conaill McGovern as sweepers, and at times Roscommon had no option but to be patient in possession as they picked their chances to deliver the final pass.

And it could have been a lot worse for Down in that first-half. Roscommon hit seven wides, and a 23rd minute save from Michael Cunningham denied Conor Devaney as he bore down on goal.

And in first-half injury-time Harrison and Mark Poland save the Mourne men some solace with a couple of points to trim the half-time lead to 0-07 to 0-04.

The Down shooting was well off form in the opening half as they often dropped the ball short into Geoffrey Claffey’s hands and totted up five bad wides before the break.

Unlike the opening half Roscommon got the better start and after points from Fintan Cregg and Ciaran Murtagh that half-time advantage had stretched to five points by the 40th minute.

But they were fortunate to see Harrison’s punch crash back off the crossbar when Carr’s point attempt dropped short two minutes later, and a good Barry O’Hagan point in the 48th minute was deserved from the Ulster side.

A black card was shown to Senan Kilbride for a third man tackle in the 52nd minute, but it didn’t derail Roscommon as points from Cathal Cregg and Conor Daly’s second opened out a seven-point lead with 12 minutes remaining.

But the win was well and truly secured in the 69th minute when Ciaran Murtagh found the bottom corner with his penalty, which should have wrapped up another season of Division 1 football for Roscommon, while Down’s search for a first win of the season continues. 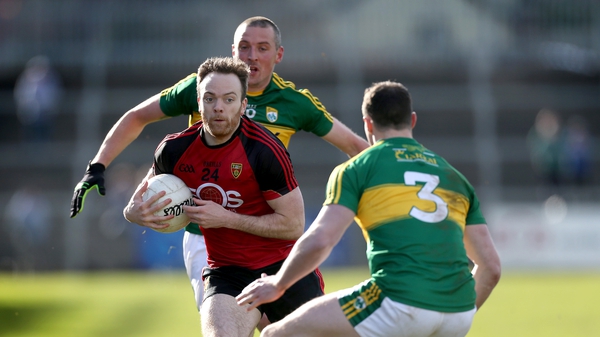 Kerry sweep Down aside to earn first points