Derry found an extra gear and produced a second-half scoring blitz to defeat Fermanagh by 3-13 to 1-10 at Celtic Park.

The visitors should have led by more than 1-06 to 1-05 at half time but Damian Barton's side unleashed their firepower with an unanswered 1-07 in a 19 minute spell to seize control of this Division 2 tie.

Played in difficult conditions in front of 1,281 spectators, second-half goals from Cailean O'Boyle and Mark Lynch swung the game decisively in favour of the Oak Leafers.

Fermanagh were the better side in the opening half and well worth the 1-02 to 0-01 lead they held after 10 minutes.

Well-organised at the back, they found acres of room to run into and Sean Quigley and Ruairi Corrigan exploited huge gaps in the Derry defence with early points from play.

Emmett Bradley's superb curling shot got Derry on the scoreboard in the sixth minute but their porous defence was found wanting again when Ruairi Corrigan rattled the net ten minutes in.

Ciaran Mullan was caught in possession and Paul McCusker ran in unchallenged, drew the last defender and passed outside to Corrigan whose left-footed shot flew into the far corner of the net.

Derry were struggling all over the field but frees from Ryan Bell and James Kielt kept them in touch before Conor McAtamney was on target from play.

His score was the signal Derry were beginning to get to grips with the game with the Fermanagh defence exposed for the first time.

Declan McCusker picked the ball up in his own half and ran forward unopposed to chip over from close range to put the visitors two points ahead again.

The contest was much more evenly matched now and Benny Heron's 25th-minute goal put Derry ahead for the first time.

Karl McKaigue broke down an Erne attack and a quick exchange of hand passes carved a big hole in the Fermanagh defence, which Heron took advantage to blast the ball high into the roof of the net.

Fermanagh responded with three of the subsequent four points before half-time.

Frees from Quigley and Tomas Corrigan were followed by a super point from full-back Aidan Breen, who jinked through three defenders to chip over from 25 yards and give the visitors a 1-06 to 1-05 interval lead.

Although Tomas Corrigan's free stretched Fermanagh's lead to two, Derry went on a scoring spree with 1-07 without reply in a 19-minute purple patch.

The game was transformed in a two-minute spell early in the second half as Derry hit 1-02 to take control.

Cailean O'Boyle fisted the goal in the 45th minute when Emmett Bradley's attempt at a point dropped short and Mark Lynch, an influential half-time substitute, scored from play, quickly followed by another from Ryan Bell.

Seeing their lead evaporate so quickly, Fermanagh's race was run and Derry piled on the misery with further scores from Lynch and Bradley before Sean Quigley ended a 24-minute scoring drought for Fermanagh. 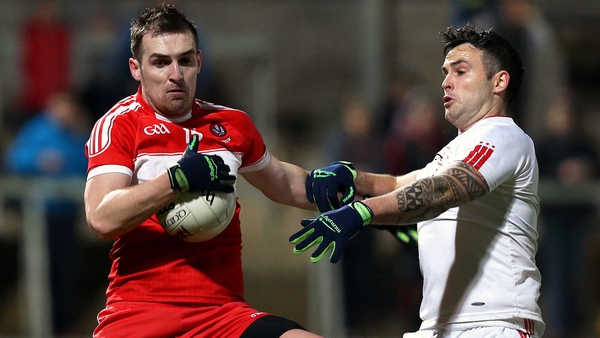