By Kevin Egan at O'Moore Park

Oulart-The Ballagh’s dream of winning a Leinster club title is still alive and well but they were blessed to survive a fierce examination of their credentials in O’Moore Park this afternoon, eventually prevailing over Clough-Ballacolla in the Leinster club SHC quarter-final.

Murtha Doyle’s first-half goal kept them in touch at the interval and they looked to be in control when further majors were added by Rory Jacob and David Redmond in the second half, but the Laois champions dominated the remainder of the tie and only fell short on account of some very poor shooting, racking up seven second half wides.

Oulart-The Ballagh recorded their 12th Wexford title in 21 seasons last month but so far success on the provincial stage has eluded them.

Supporters of the Wexford club would argue that they’ve been hugely unlucky at various stages but they certainly enjoyed the rub of the green here, even though Clough-Ballacolla’s profligacy meant that they were the architects of their own demise.

Even allowing for their poor finishing, the Laois champions enjoyed the lion’s share of possession throughout this contest, while any notion that they would be rusty after a five-week break since winning their domestic championship was blown out of the water in the opening minutes.

The first four points of the game were all sent over Conor O’Leary’s crossbar before Paul Roche struck a long range free for Oulart, but that fast start was negated when Murtha Doyle struck a controversial goal for the Wexford club.

As play developed down the left wing of the Oulart-The Ballagh attack, Peter Murphy appeared to strike Lee Cleere in an off-the-ball incident on the opposite side of the field. As Cleere lay on the ground, Murphy was able to join the attack and give his side an overlapping player, and he duly fed Doyle, who was able to beat Darren Hanlon in a one on one situation.

Murphy was shown a yellow card on the linesman’s advice for his role in the affair, however the goal stood and Clough-Ballacolla were no further on for dominating the opening phase of the game.

Two excellent points from Maher and Willie Hyland gave the Laois club an 0-8 to 1-04 half time lead but a one-point cushion was scant reward for their superiority from general play.

Many of the Clough-Ballacolla defenders also contested the decision by Peter Burke to award a penalty for a foul by Tom Delaney on Garrett Sinnott early in the second half, but in this instance Burke’s decision seemed accurate.

There were also complaints that Rory Jacob crossed the 20m line before striking the penalty, however he picked out the bottom corner and gave his side a two-point lead for the first time in the game.

Clough-Ballacolla duly rallied but they failed to convert their dominance into scores, veteran full-back Keith Rossiter marshalling the Oulart full back line superbly.

The underdogs’ shooting from range also started to desert them and their race looked to be run when David Redmond scored the game’s third goal to make it 3-07 to 0-11 after 48 minutes.

The Laois side mounted one last surge and points from Ronan Broderick and Robbie Phelan left them within one puck of levelling the match, but they never looked like getting a clear sight of goal.

They had their chances to tie the game up from points alone, but a series of shocking efforts were sent wide of the target, before Billy Dunne wrapped up the contest with a long-range strike, setting up a trip to Mullingar and a contest with Clonkill on 15 November for Oulart. 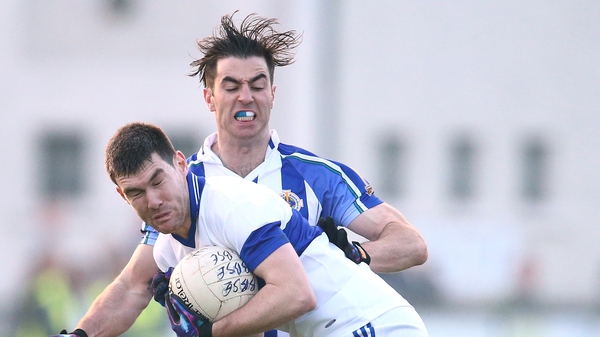