His first net blast came in the 19th minute and put Cuala into a lead they wouldn't relinquish after an evenly contested first 20 minutes or so.

His second was equally crucial 12 minutes from time as he effectively put the game beyond Jude's who slumped to back to back final defeats as they chased a maiden title.

Darragh O'Connell was excellent at midfield too, weighing in with three points from play while county man Colm Cronin bagged the other goal and 1-02 in total.

Aside from capturing a fourth county title ever, the 10-point win sends Cuala through to a Leinster club championship clash with Coolderry of Offaly.

Cuala received a major blow beforehand when confirmation came through that county defender Paul Schutte was ruled out.

A shoulder injury is understood to have ruled the centre-back out, paving the way for Jake Malone's introduction to a rejigged team. 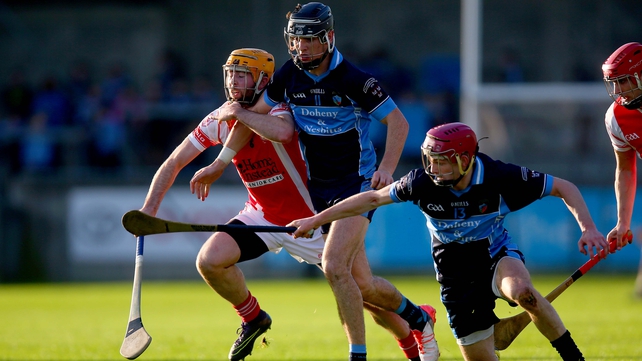 Cuala were fancied for victory thanks partly to their semi-final win over Ballyboden St Enda's who'd claimed six titles since 2007.

Mattie Kenny's men led by five at one stage in the first-half and took a three point lead into the interval though it was far from convincing.

Sean Treacy's 19th minute goal was fortunate as he pulled on the ball from close range after a Mark Schutte effort was blocked down.

Aside from that, the majority of Cuala's points came from placed balls with David Treacy converting three frees and a sideline cut.

Conditions were perfect and unseasonably mild but Jude's couldn't find a spark either and required points late in the half from Joe McManus and Ronan Joyce to trail by just 1-7 to 0-7 at the break.

Still, that strike left just two between them and the margin was down to the minimum shortly after when Jessy Kennedy fired over for Jude's.

Unfortunately for Jude's, that was as close as they came to catching Cuala who responded with 1-01 including a Colm Cronin goal to reopen a five-point lead with 20 minutes remaining, 2-08 to 0-9.

Jude's battled on and reduced the margin to four again at the three quarter mark but the concession of a third goal killed the contest.

Sean Treacy took advantage again for Cuala after Cronin's clever interception of a 48th minute puck out and lay off.

Jude's needed goals and chased them late on but all they could muster was two more points from Sutcliffe as they experienced another bitter final defeat.

Subs: C Sheanon for Kenny, B Connolly for Waldron, B Browne for Timlin.